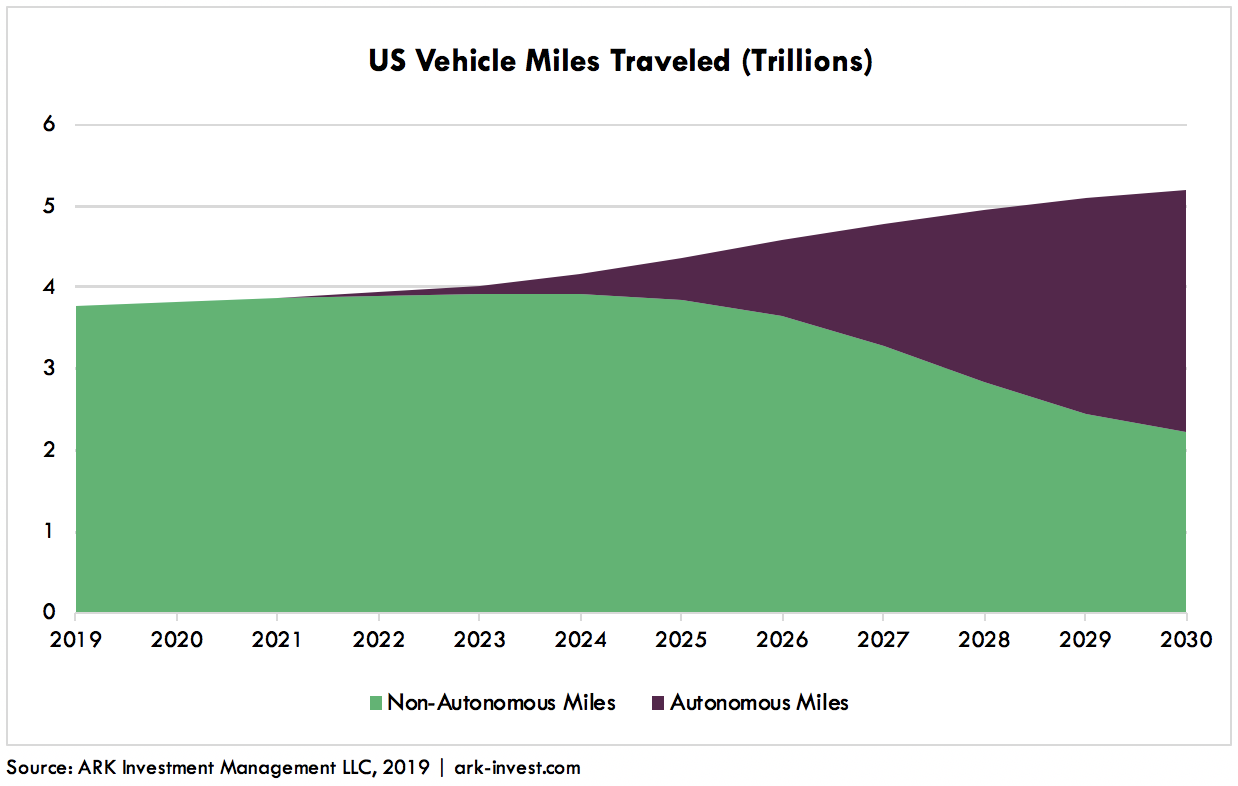 During the next five to ten years, as riders may increasingly choose to travel on autonomous taxi networks, the auto insurance industry – a $220 billion market – will face the biggest threat in its history, a collapse in the number of drivers and accidents.

ARK’s research on Mobility-as-a-Service suggests that roughly 57% of all automotive miles traveled in the US will be autonomous in the next 10 to 12 years, and that non-autonomous miles traveled could drop by nearly 40%. If our research is correct, then what will happen to auto insurers?

If vehicles submit to autonomous networks during the next decade, then the auto insurance industry will convulse. Our research suggests that, as drivers give the right of way to autonomous vehicles, auto premiums will drop to levels last seen in 2011-2012, shrinking the market to half the $300 billion currently forecasted for 2030. As shown in the graph below, autonomous vehicle premiums will be roughly a third of the total market in 2030 even if they account for the majority of traveled miles in the US, because the cost to insure autonomous vehicles will be significantly cheaper thanks to their superior safety profile. According to the National Highway Traffic Safety Administration, 94% of all auto accidents are caused by human error. We believe replacing the driver with sophisticated software and hardware will increase the safety of vehicles, lowering the cost to insure them. 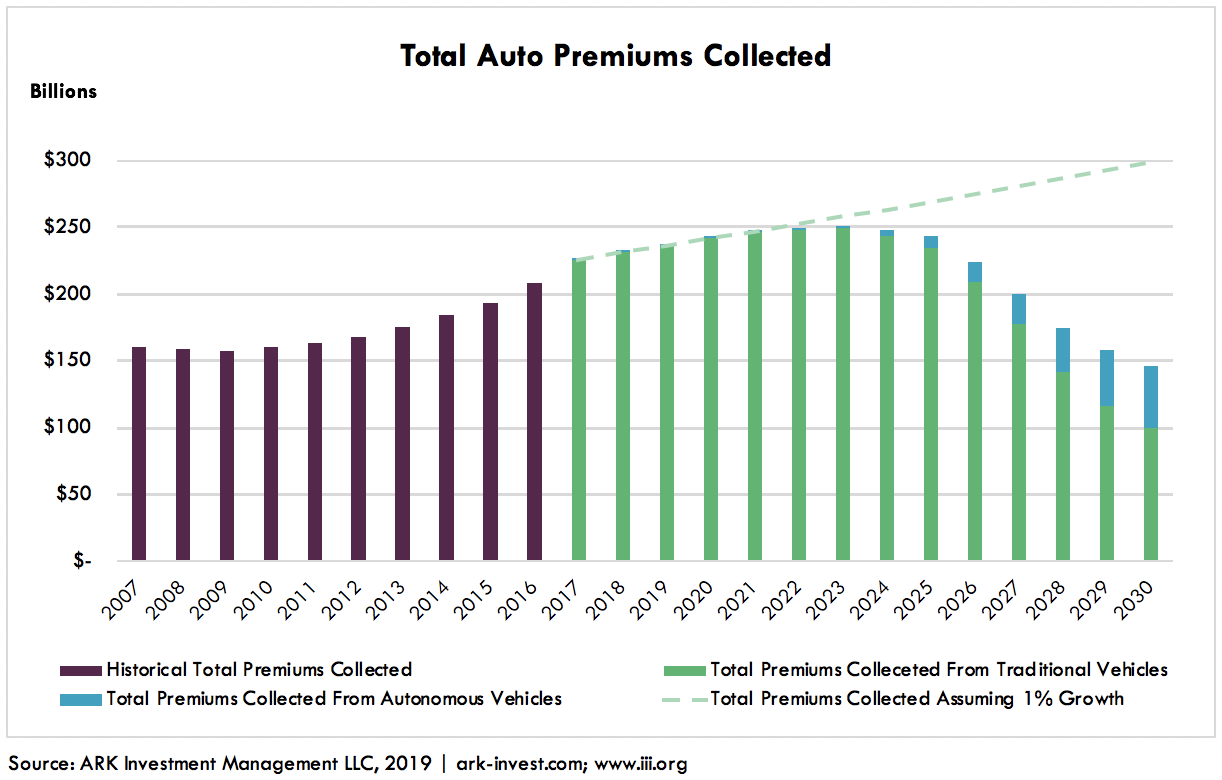 Key to the decline in traditional auto premiums will be the rate at which young drivers embrace autonomous. As with many new technologies, younger generations – typically those in the 16-24 age range – are first adopters. Today, younger drivers pay much higher than average premiums because they account for a disproportionate number of accidents, as shown in the graph below. Consequently, as autonomous vehicles go mainstream, insurers will lose their highest paying customers first. 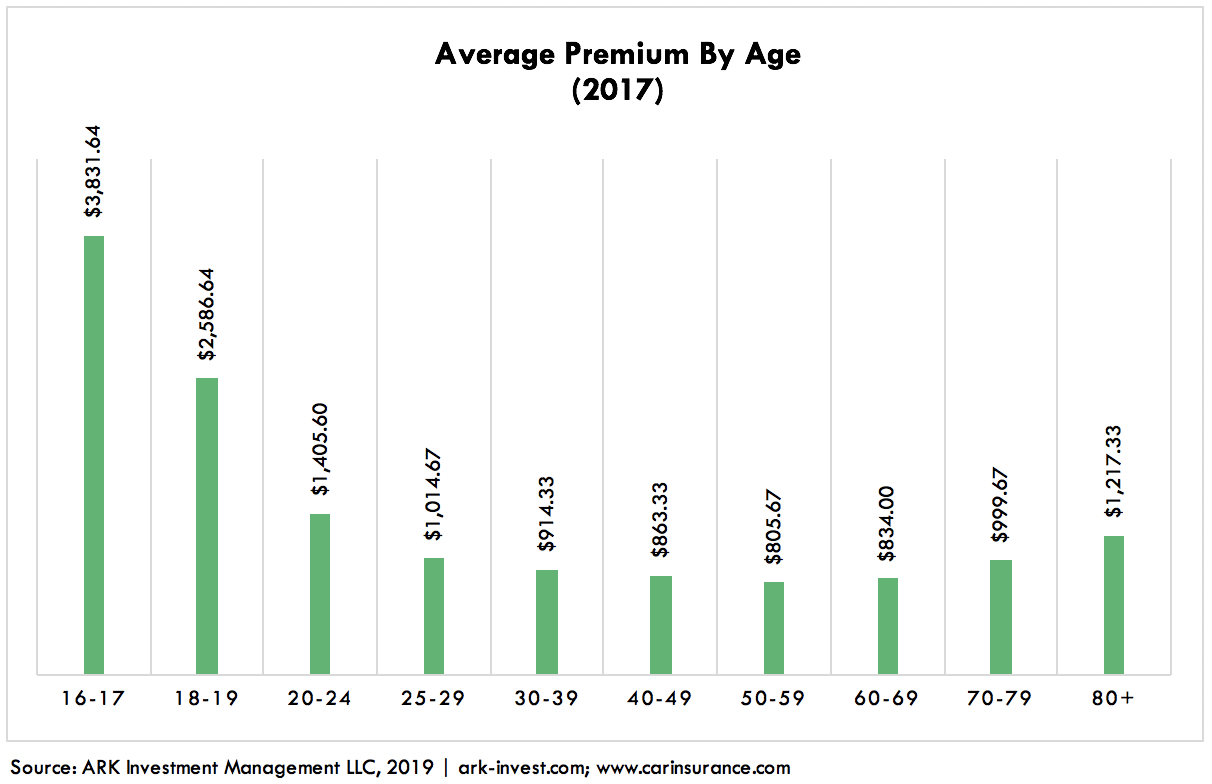 If or when the market consolidates, traditional insurers will try to offer products for autonomous vehicles, but as risks shift from drivers to cars, original equipment manufacturers (OEMs) probably will insure the vehicles themselves. Operating fleets of autonomous vehicles, they will shoulder some of the liability and reinsure the balance. Besides reinsurance companies and OEMs, we believe the winners in this new world order will be cyber security and other companies that insure the safety of the hardware and software in autonomous vehicles – think The Fate of the Furious zombie car scene in which cyber terrorists control cars remotely. The losers will be personal car insurance companies.

The traditional auto insurance industry should become increasingly competitive as smaller tech-orientated insurers encroach on it and gain share. According to a report by E&Y, InsureTech investments have compounded at a 45% annual rate since 2012, hitting $2.3 billion in 2017.[1] With revamped pricing models, more friendly user interfaces (UI), and more mobile strategies, InsureTech companies are threatening the existence of traditional auto insurers, pointing to a tough road ahead, as shown below. 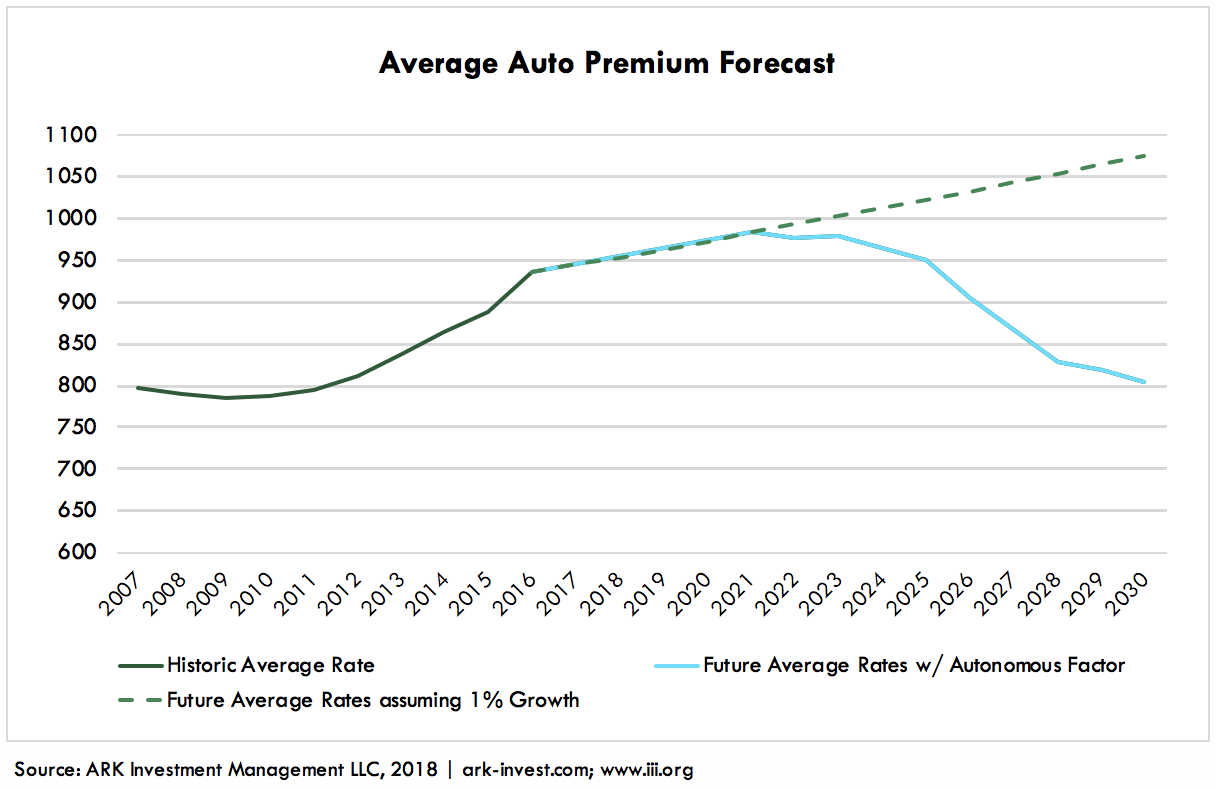