In 1913 Henry Ford installed the first moving assembly line for the Model T. Moving at six feet per minute, it reduced the time to build a car from more than 12 hours to one and a half. While impressive, the increased rate of production was not the most important impact. We think the moving assembly line disrupted the entire transportation industry. Moreover, ARK’s research points to another transformation of the transportation–or mobility–value chain: the consolidation of automotive manufacturers. ARK believes that the shift to electric vehicles (EVs) and the adoption of autonomous technology will precipitate an automotive consolidation among existing manufacturers–the likes of which we have not seen since the first half of the twentieth century.

The U.S. horse and mule population peaked when Ford launched the assembly line in 1913. As shown below, 1914 was the inflection point for both the equine and the automotive markets based on ARK research. In little more than 10 years, the number of motor vehicles surpassed the horse and mule population. For instance, the chart below shows that by 1925 the horse population had declined 17% from its peak while the number of motor vehicles soared by more than 1200%.

ARK anticipates a pattern associated with technological enabled disruption in the auto market during the next few years. We think autonomous electric vehicles are likely to take significant market share from vehicles powered by the Internal Combustion Engine (ICE). ARK believes car owners are unlikely to abandon their ICE-based vehicles right away, but at some point during the next five to ten years, EVs will account for most of the increase in auto sales while ICE vehicles depreciate to their logical end. As usual in this kind of transformation, disruptive technology takes nearly all of incremental sales and the legacy technology is utilized for the remainder of its useful life. 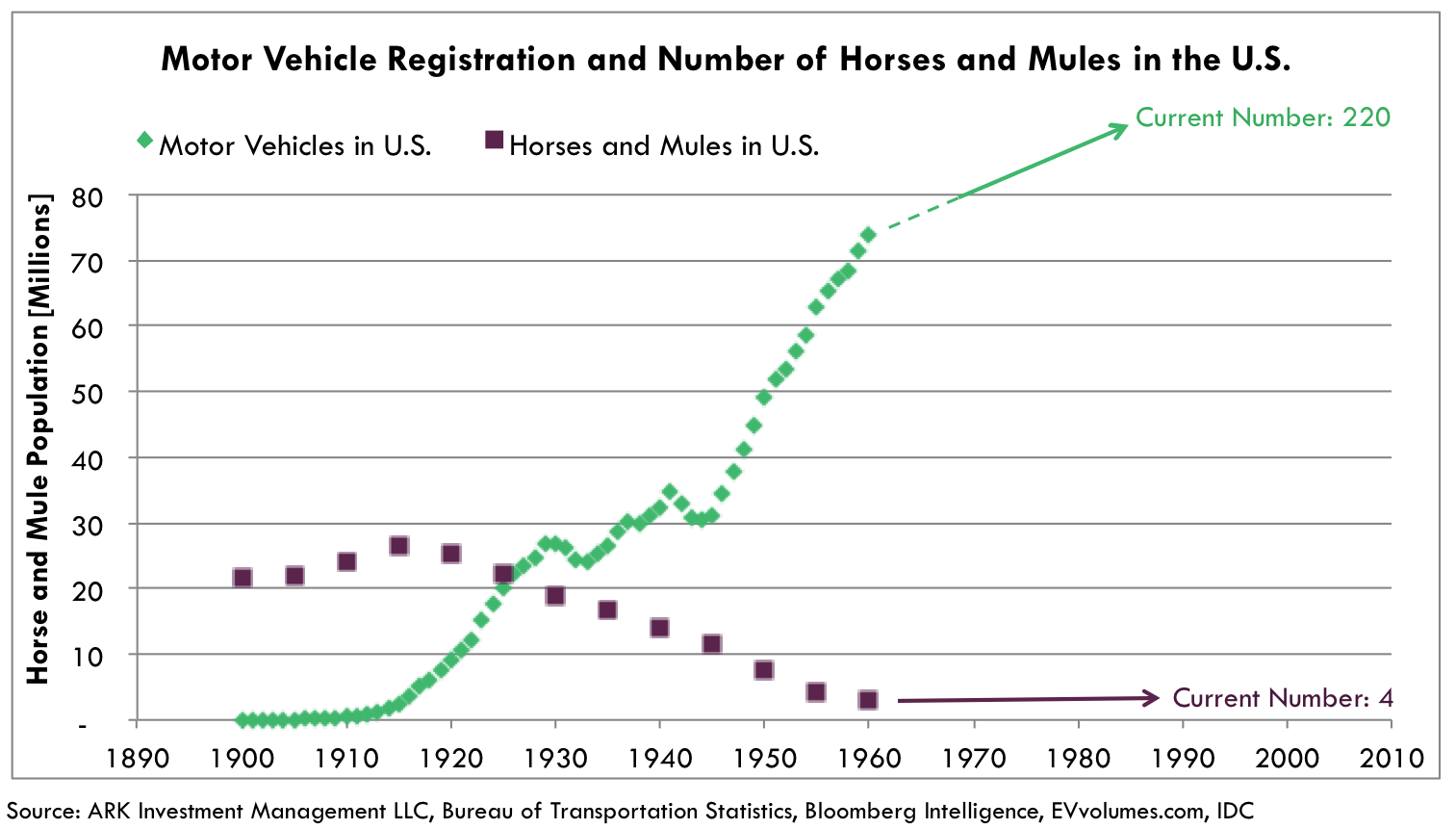 Lesson Two: Technological Disruption Will Cause Significant Consolidation in the Auto Industry 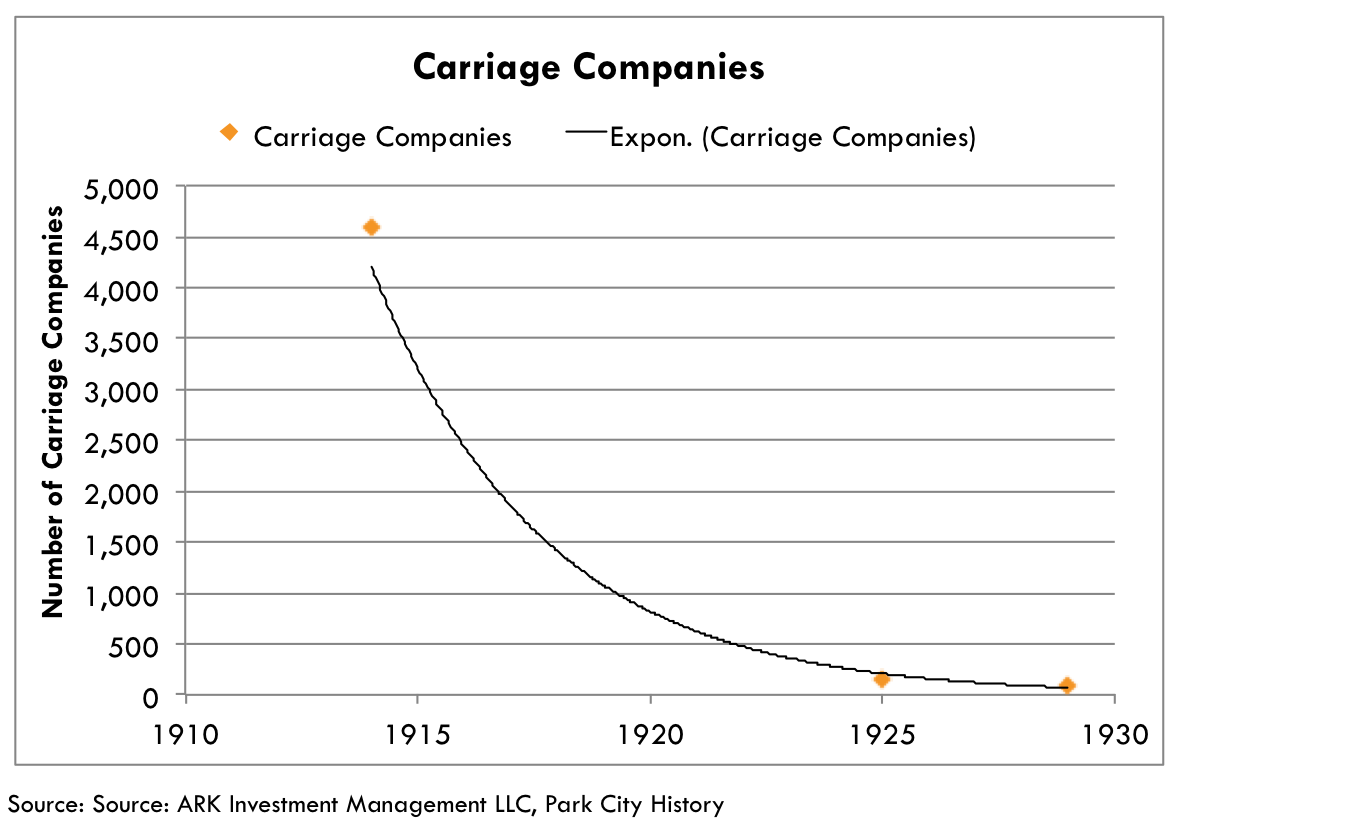 Of course, Ford’s innovation disrupted more than the equine mobility market: the automotive market consolidated by around 80% from more than 250 manufacturers in 1909 to fewer than 50 by 1930. 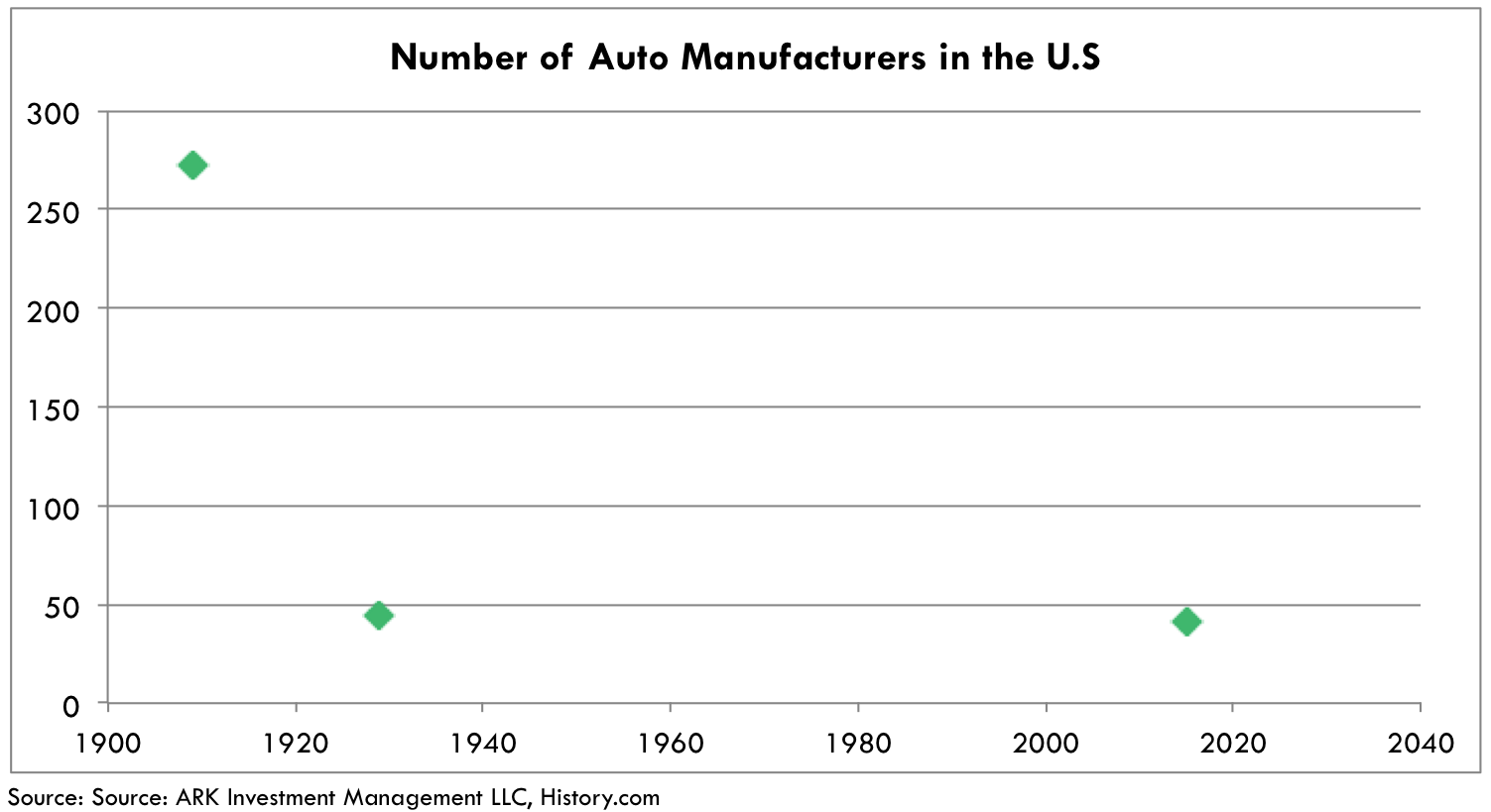 According to ARK’s research, just the transition to EVs could cause modest automotive consolidation among car manufacturers. To put the automotive industry into perspective, one can examine the Herfindahl-Hirschman Index (HHI), a measure of market concentration.[2] As shown below, today the EV sub-industry is somewhat more concentrated than the auto industry as a whole. Just as the moving assembly line transformed auto manufacturing roughly 100 years ago, we think EVs have the potential to do the same today. Manufacturing is much simpler and faster for an EV compared to an ICE-powered vehicle primarily because EV’s have a fraction of the number of parts.In a recent conference call held on June 22, 2016, Elon Musk channeled his inner Henry Ford saying, “The fastest car plants in the world, the car exit velocity is basically grandma with a walker. It’s real slow, it’s 0.2 meters per second… We can do way better than that.” 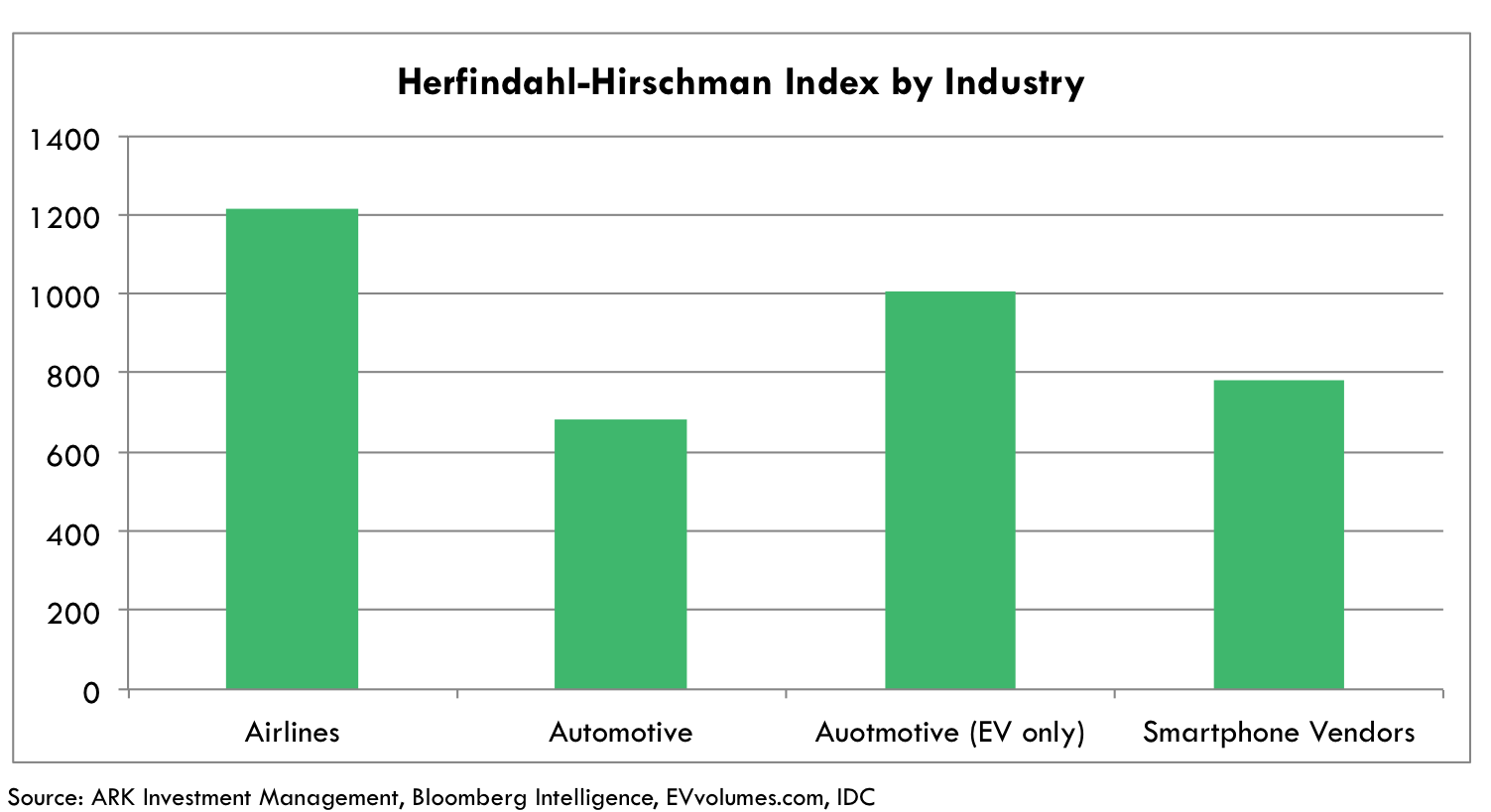 ARK thinks adding autonomous capability to the mix of vehicles is likely to cause a significant acceleration in the market and the automotive consolidation. ARK believes Autonomous vehicles are likely to benefit from the network effect: a company with high market share will be able to collect more mapping data and offer superior autonomous performance, further boosting its market share, increasing its data and performance advantages, and so on. Industries that are data-centric and benefit from the network effect are five to seven times more concentrated than those that are not, as shown below. ARK believes that comparing concentration between smartphone vendors and smartphone operating systems (OS) is particularly instructive. While the auto industry is similar to the smartphone space today, autonomous technology will move it up the value chain to a position much like that in the smartphone OS space. 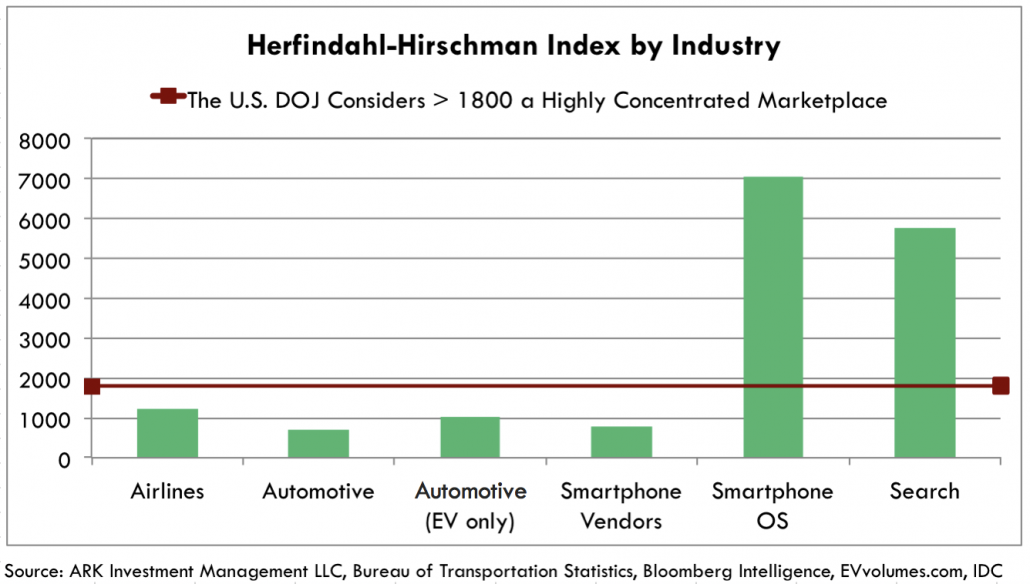 Manufacturing electric vehicles requires expertise different than that for ICE vehicle production. ARK’s analysis of the declining cost curve of battery pack systems shows that EVs could be lower priced than ICE vehicles on a like-to-like basis by 2022. By that time, the impact of mapping data on autonomous performance, the network effect, and market share gains should be obvious as the market begins to consolidate at a rapid rate.

While the CEO of Fiat Chrysler already is calling for an automotive consolidation to combat rising developmental costs from stricter emissions standards, ARK anticipates a completely different scale of consolidation. Time to circle the wagons…!