Automation Could Double Operating Margins and Equity Markets By 2025

This article about the impact of automation on the economy is a sequel to ARK’s previous research papers, What We Can Learn from the Automation of the Agriculture Industry and The Potential Impact of Automation on Manufacturing Profitability. In this piece we explore how automation might impact aggregate equity market valuations during the next five to ten years.

Based on the history of agriculture and manufacturing, automation and operating margins are positively correlated: as automation increases, labor’s share[1] of revenue tends to decrease, and as labor share decreases, operating margins tend to increase. We have been researching whether or not that correlation might apply to many industries, leading to higher operating margins and equity market valuations in the aggregate.

All else equal, ARK research suggests that, in the absence of sales growth, an increase in automation could double operating margins and the enterprise value (EV) of equity markets by 2025. Compared to the ~25 years necessary to reach current automation levels in manufacturing, economy-wide automation could reach similar levels within the next five years due to the convergence of technologies and increasing rate of innovation. For example, the IRS reduced the time to complete a task from one year to 72 hours using robotic process automation from UiPath.[2] Furthermore, the rollout of autonomous robotaxis alone could rapidly increase automation density. According to our latest research, automation density across all industries could increase from ~30 robots per 10,000 employees today to ~170 per 10,000 employees in 2025, a level consistent with the robot density in manufacturing during 2015. 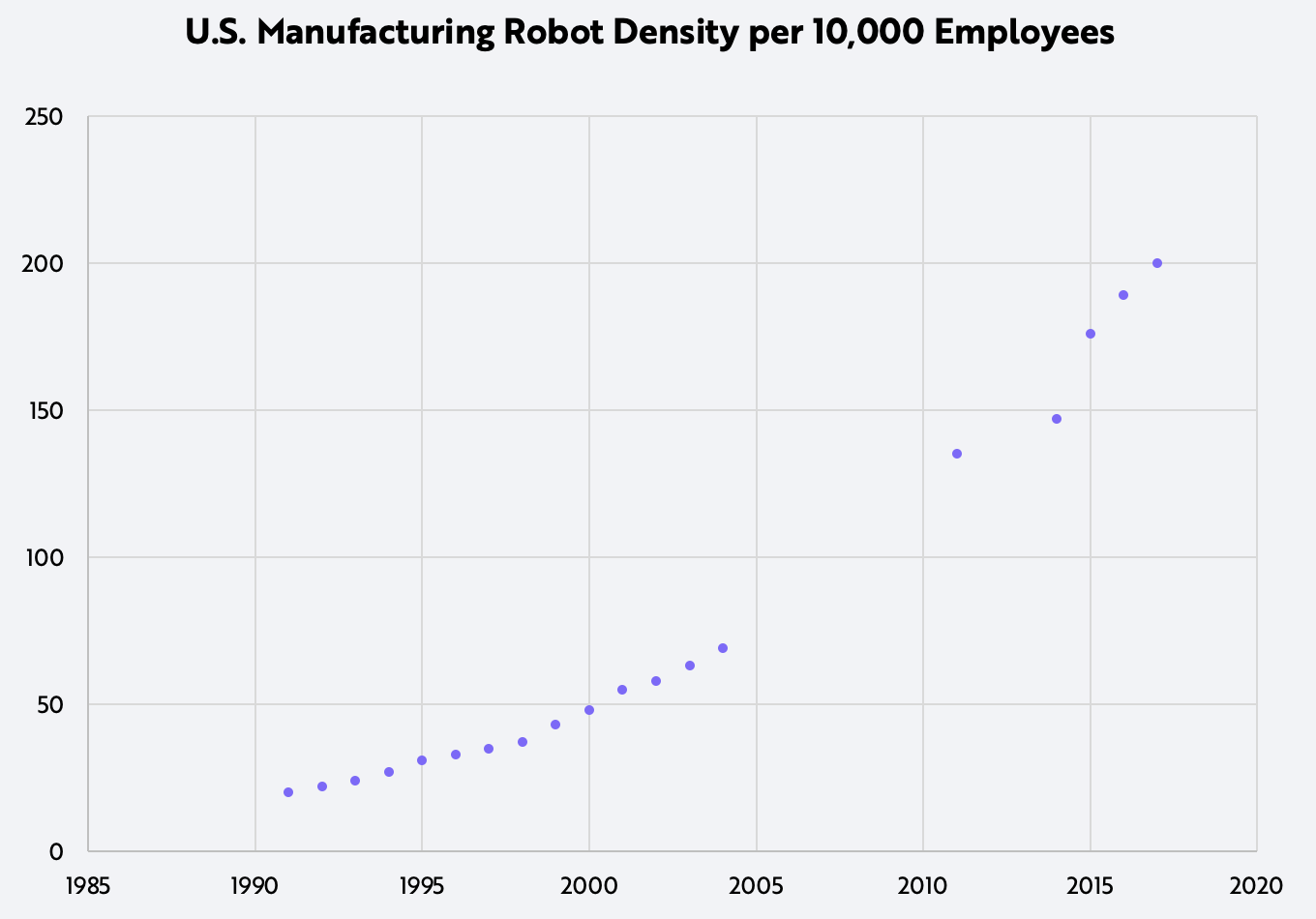 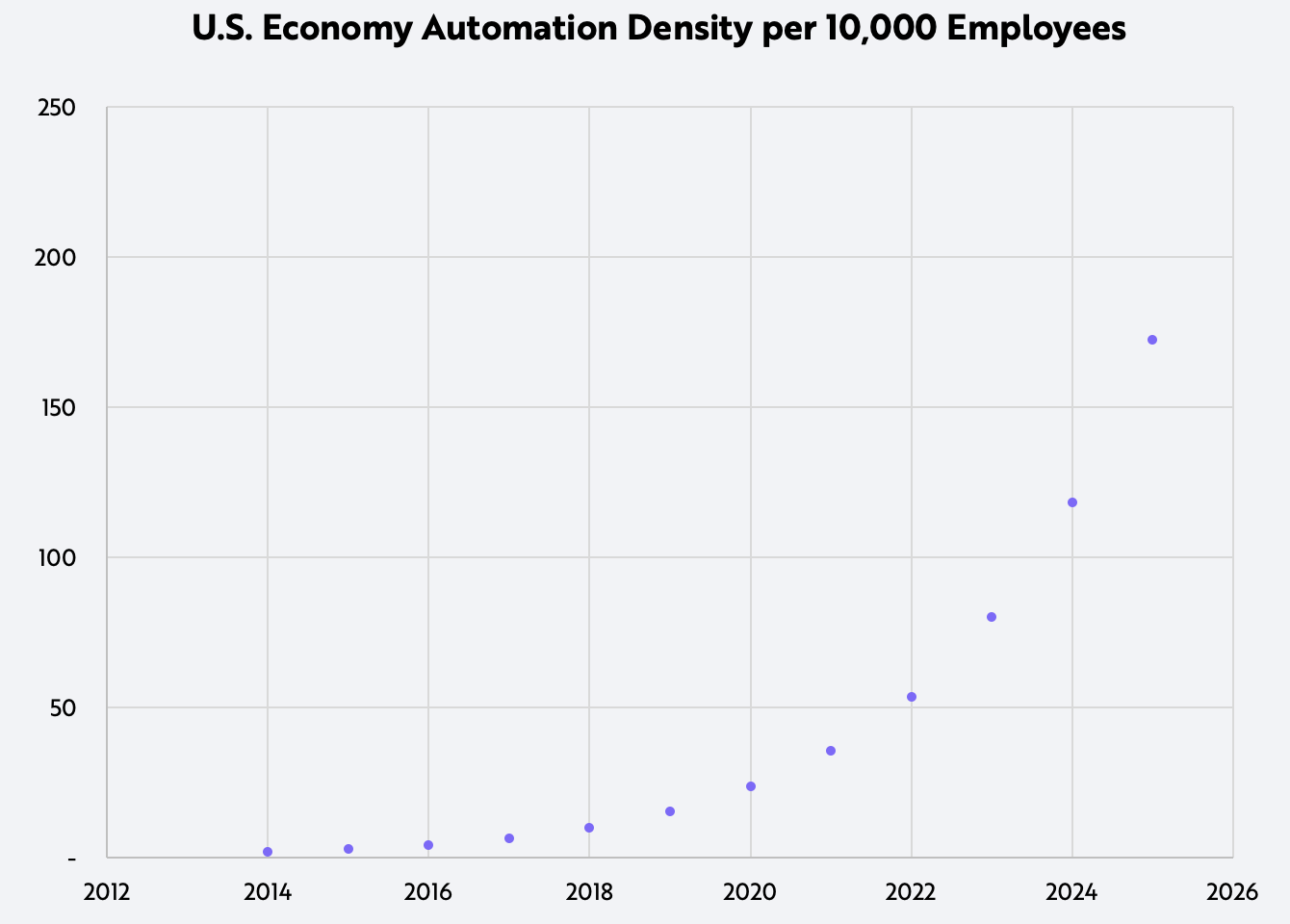 In the manufacturing sector, as robot density increased from roughly 50 to ~170 per 10,000 employees, labor compensation as a percent of revenue fell by more than 10 percentage points, as shown below. 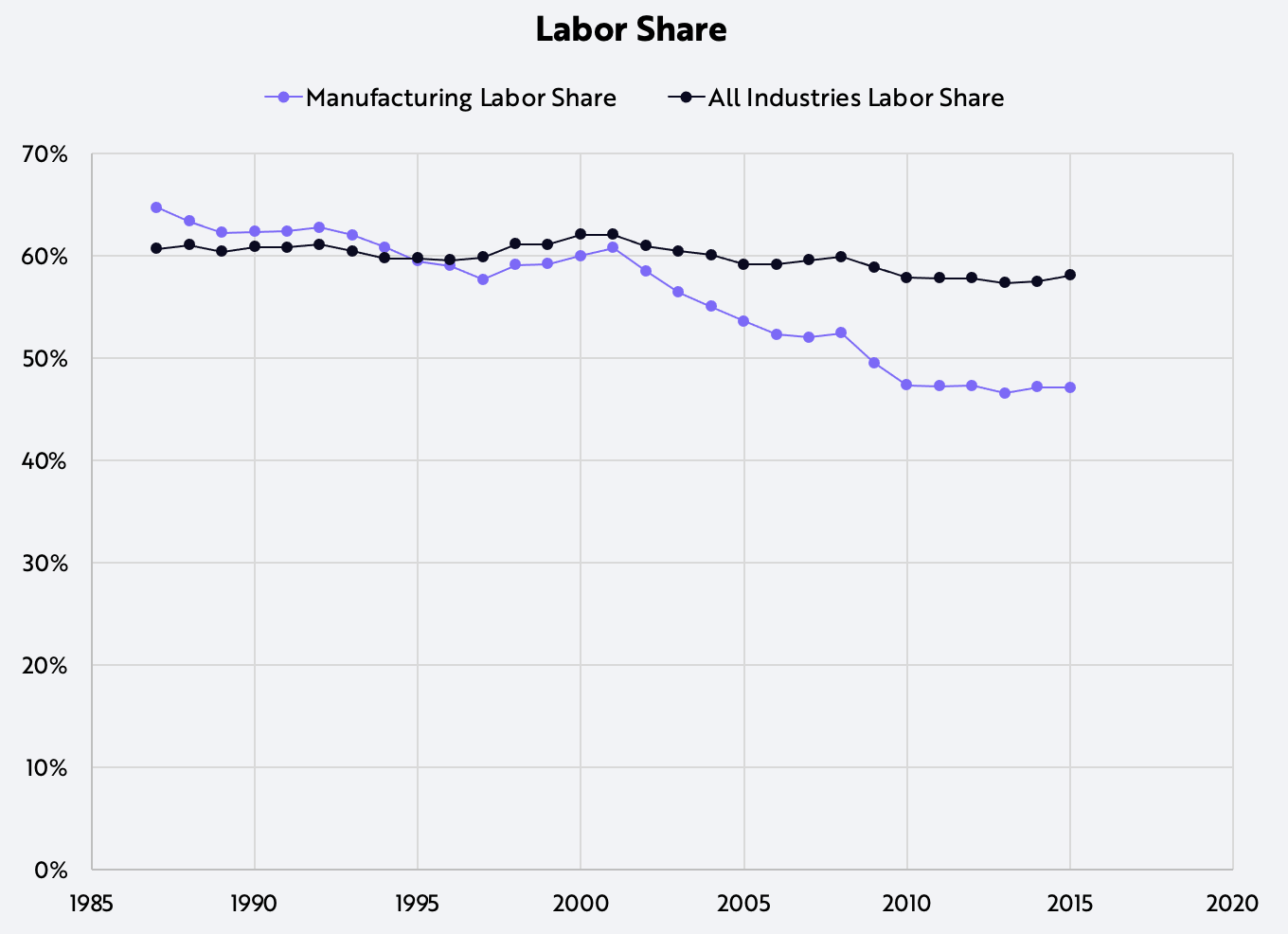 In the second part of this series, ARK surfaced a positive correlation between automation and manufacturing profitability. For the economy as a whole, the same relationship seems to pertain: labor compensation as a share of revenue is negatively correlated with operating margins, as shown below. 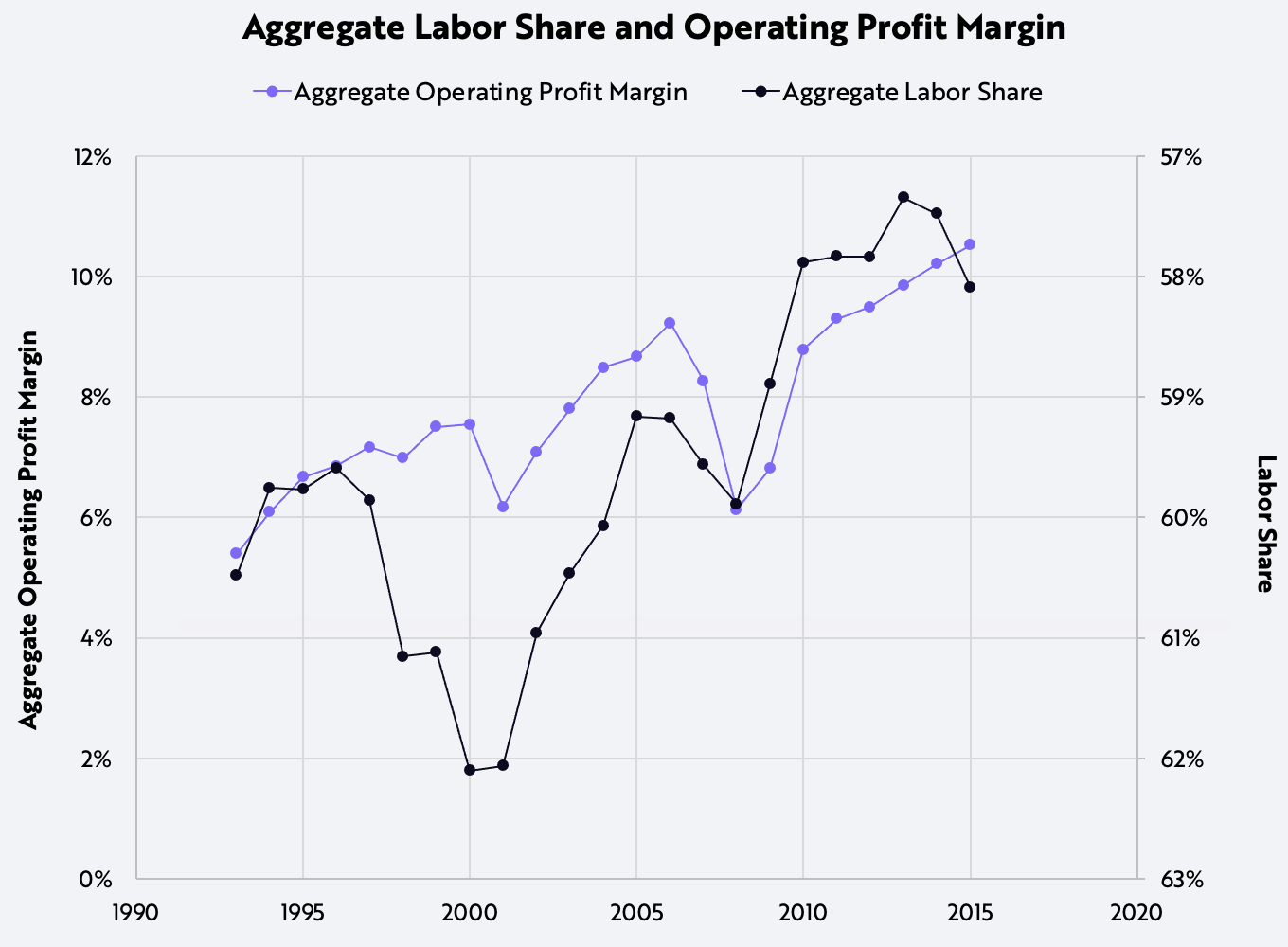 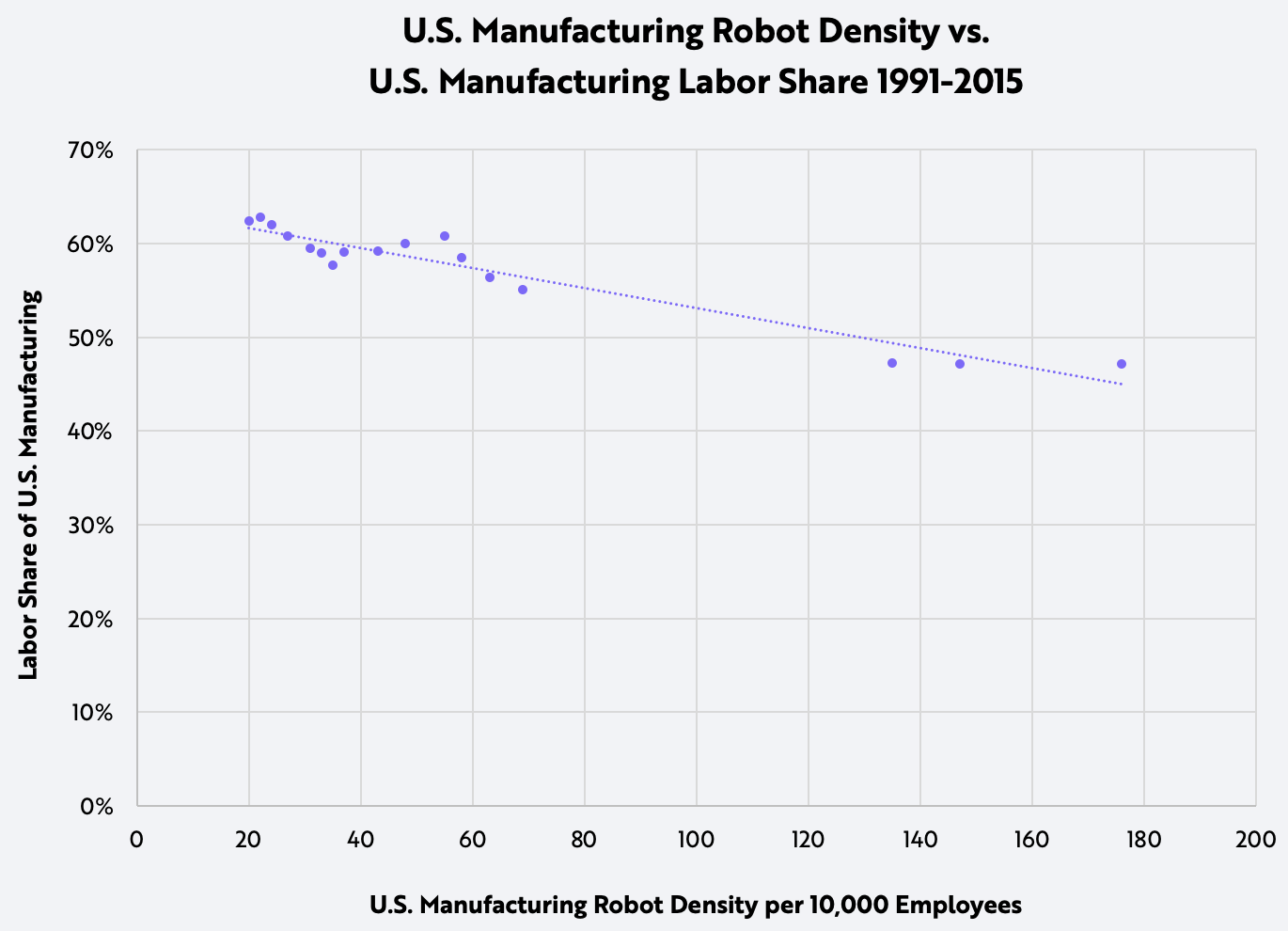 *Note that robot density does not reach 200 as in the first chart because the data set for U.S. manufacturing labor share only goes through 2015.

Automation has impacted the profitability of agriculture much more than manufacturing, as shown below. Each percentage point drop in labor compensation as a share of revenue increased agricultural operating margins by 3.8%, more than 12 times the 0.3% in manufacturing, as shown by the slope of the lines below. Across all industries, if labor compensation as a share of revenue were to decline the same 15 percentage points as in manufacturing, corporate operating margins would double to ~20%. 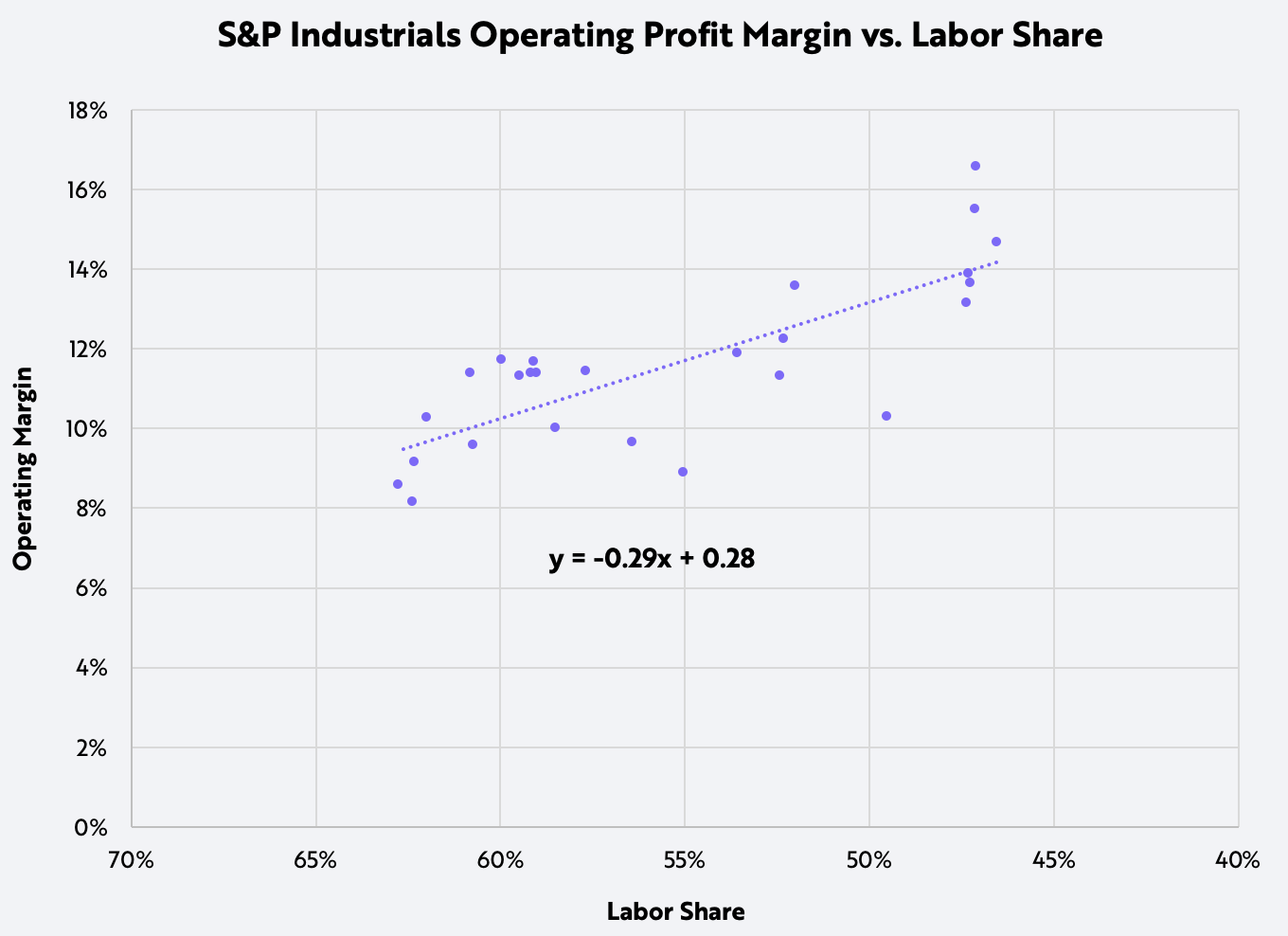 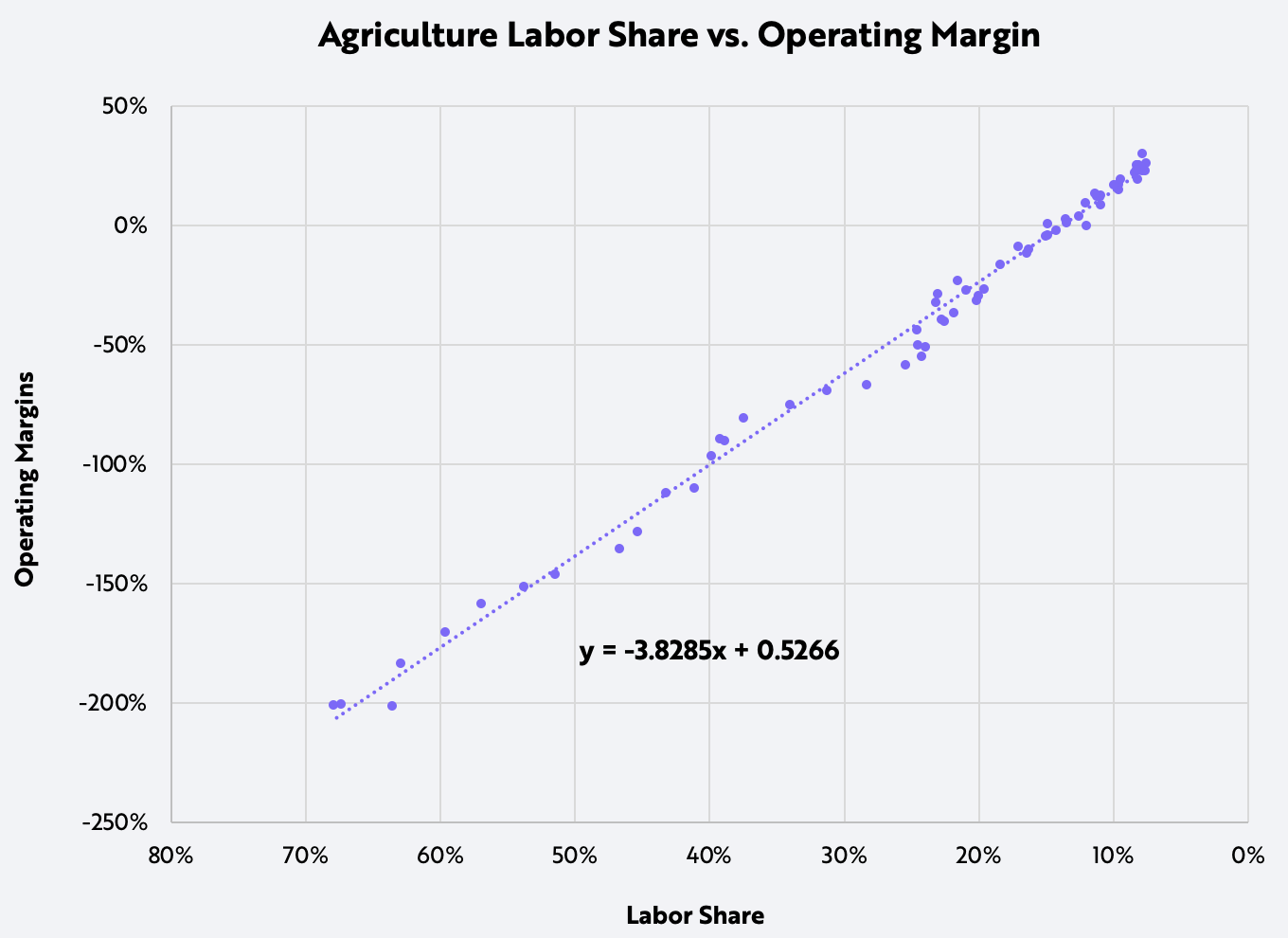 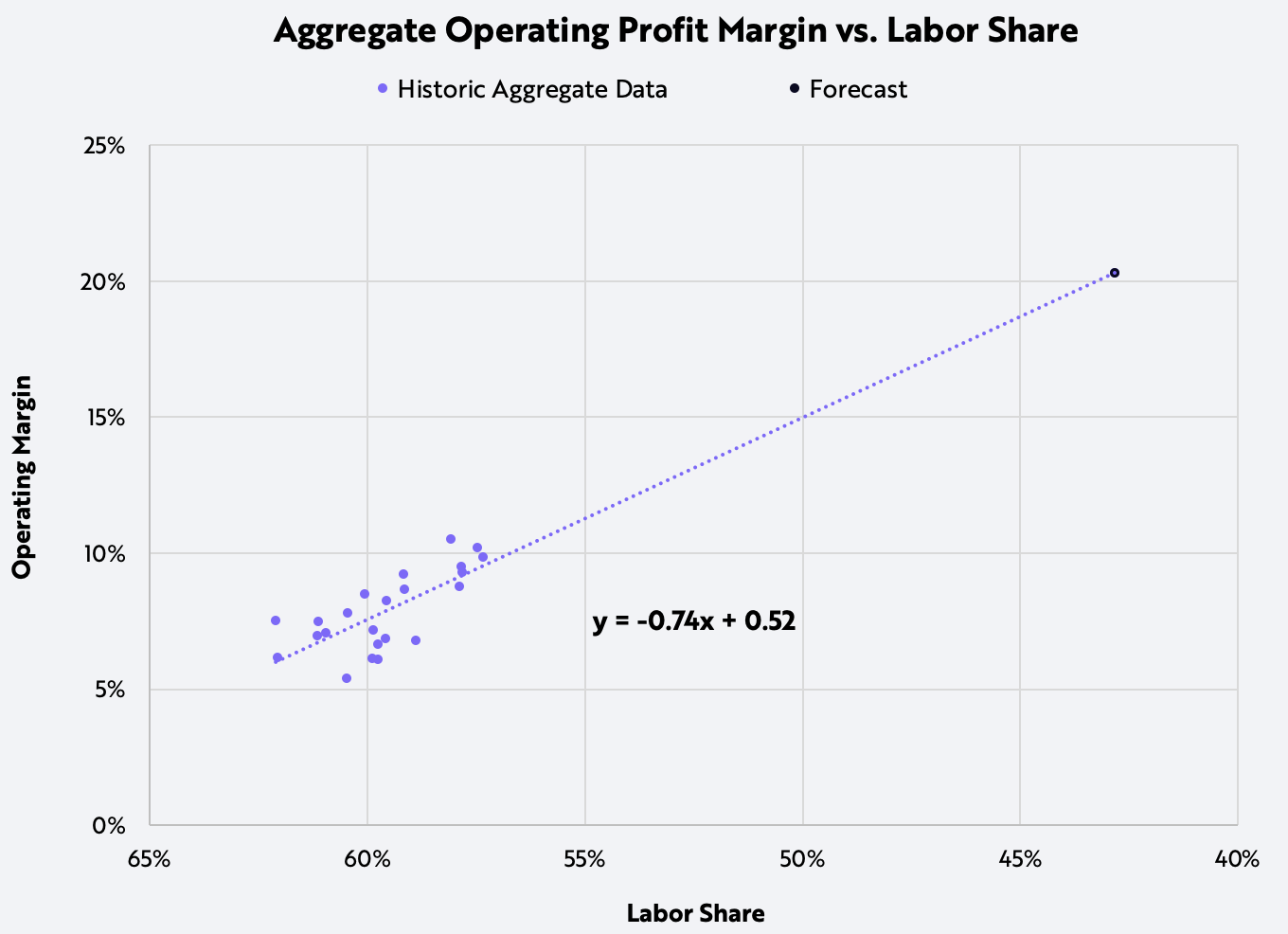 Based on discounted cash-flow models, a doubling in operating margins would double the multiple of enterprise value to sales.[3] For example, The Russell 3000 could double its “fair” EV/sales multiple from roughly 2.2[4] to nearly 4.5, without any top line growth, solely because of increased profitability from automation, as shown below. 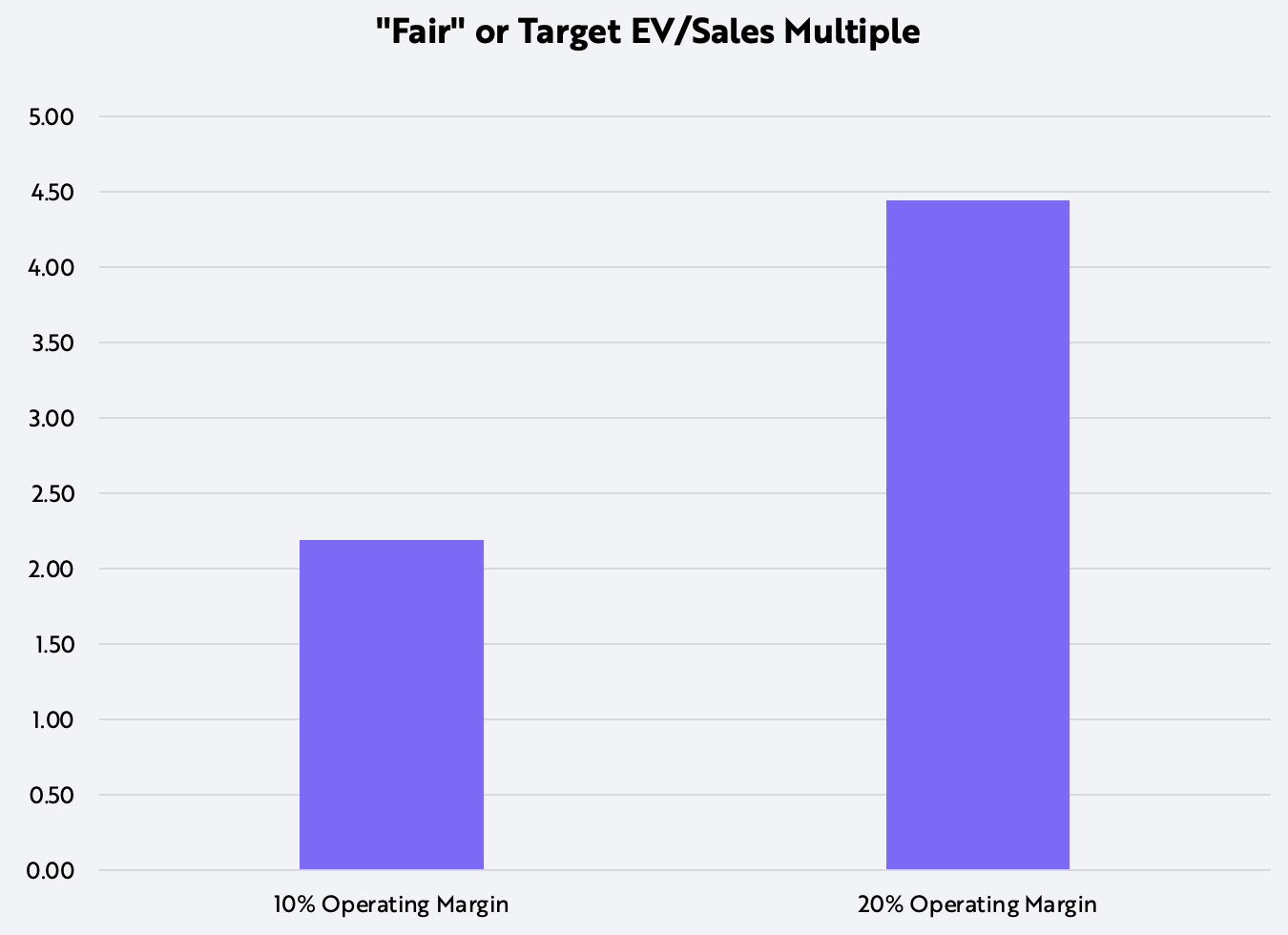 That said, all else may not remain equal, suggesting that automation could impact metrics other than operating margins, among them wages, prices, and capital investment. Wages and capital investment could increase more and prices less than otherwise would be the case. In turn, real GDP might be higher and the return on invested capital (ROIC) lower than otherwise would be the case.

Moreover, history suggests that certain industries and companies will automate rapidly, boosting productivity, profitability, and sales, while others will lag. The impact of automation across the broader economy could be catalyzed. Indeed, a handful of innovative companies might adopt automation early and aggressively, operating much more profitably than others and catalyzing adoption across the economy.