This piece has been updated since its original publication. For a detailed explanation of our research assumptions about drone delivery click here.

Update: We published this article back in April 2015 relatively shortly after Amazon’s first announcement of Amazon Prime Air. This week we finally received new insights into the drone delivery program. The Seattle-based retailer [AMZN] revealed a new prototype, which the company claims is able to fly distances of up to 15 miles and deliver packages within 30 minutes. The image [1] was published on amazon’s website and the drone (“UAV”) looks like a cross-over of a helicopter and a model airplane. Also published was this  YouTube video:

While the media and others mocked the original announcement in Dec 2013, UAV delivery is likely to disrupt traditional package delivery significantly. If the FAA gives Amazon clearance for commercial rollout of its drone delivery service, the price that a consumer would pay for the delivery of a five pound package could be less than $1.[2] Just as impressive, delivery times could drop below thirty minutes. As shown below, today’s fastest delivery options are 9-140x more expensive for a small package. 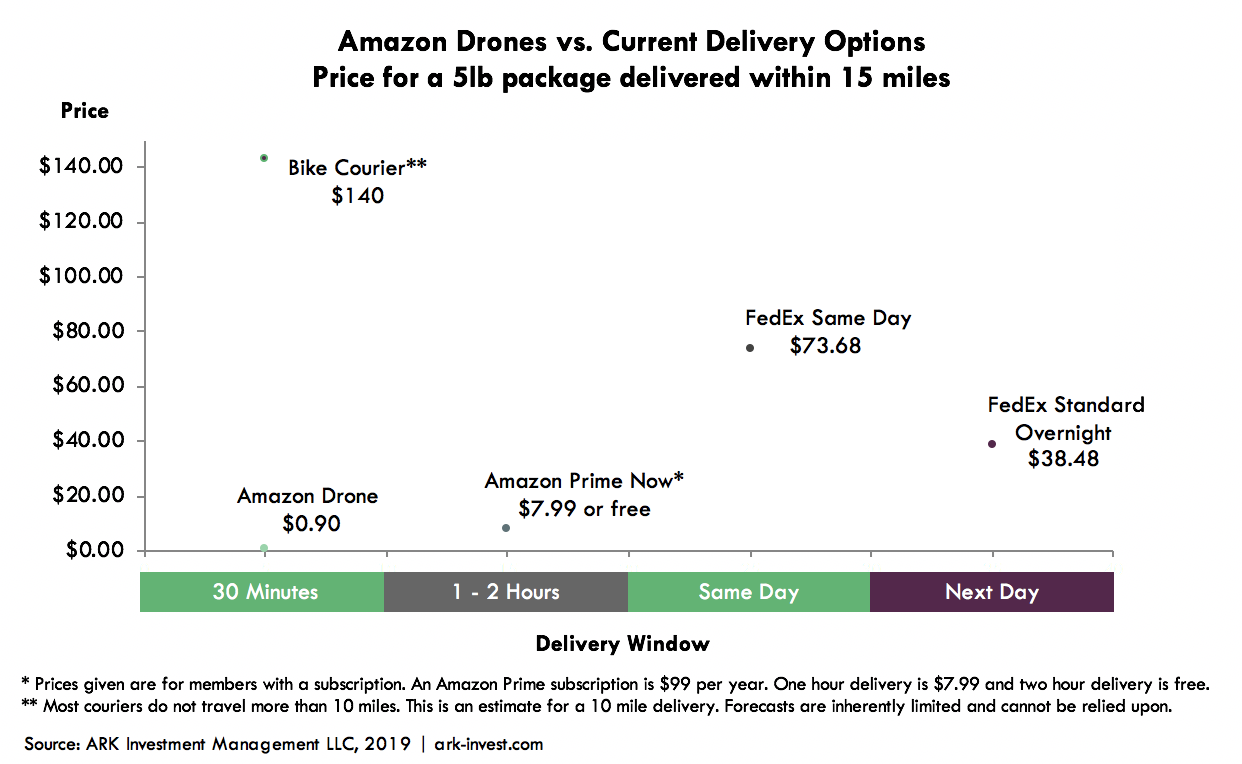 Consumers will enjoy low cost and convenience, while Amazon stands to make considerable profit. At less than $1 per package, Amazon could achieve an internal rate of return on its UAV investments of roughly 50%. Because delivery of a five pound package will cost $0.88,[3] the margin will allow Amazon to break even after the first year. High return is achievable even with estimates for infrastructure, drone investment, and operating expenses, which are primarily labor driven. We assume that human operators are responsible for remotely monitoring drone landing, although autonomous flight improvement should continue to decrease the amount of human oversight required overtime.[4]

However, depending upon the operating expenses of the program it may make strategic sense for the company to effectively offer the program free to Prime members across all its major US metros.

Before US drone delivery becomes a reality, Amazon faces significant regulatory hurdles. The FAA approves commercial use of drones on a case-by-case basis, and regulations are stringent. The agency recently granted Amazon approval for drone testing, but the drones are not allowed to fly over public property, and must be in an operator’s line of sight at all times. Until the rules change, US commercial rollout of Prime Air seems unlikely.

Aside from regulatory hurdles, Amazon must address the safety and reliability of drones. A common criticism is that “see and avoid” technology needs significant improvement. Newer systems do have air traffic control and crash prevention technology.[5] For Amazon, cameras could be part of the solution allowing remote operators to control takeoffs and landings.

While the FAA has been dragging its feet, Amazon has taken advantage of less strict drone regulations abroad. Prime Air development centers are located in the UK and Israel, and test flights have been conducted in Canada and India. If the FAA is too slow to relax US drone restrictions, Amazon will initially launch Prime Air internationally.