An Alzheimer’s treatment that converts the neurodegenerative disease from a cruel killer into a tolerable chronic condition could become the best selling drug in history.[1] According to ARK’s estimates, the annual revenue associated with an effective Alzheimer’s treatment could approximate to $120 billion USD.[2] While many companies have attempted to develop an effective treatment, not one has succeeded. The failure of these drugs has stirred considerable controversy over the cause of Alzheimer’s, raising the research bar for companies committed to solving the puzzle.

Among the top ten leading causes of death in the United States, Alzheimer’s is the only disease that cannot be prevented, cured, or slowed. Typically, brain morphology begins years before the hallmark of Alzheimer’s, memory lapses, becomes noticeable. While progression through the three stages of Alzheimer’s varies by person, the average patient can live four to eight years post-diagnosis. That said, the quality of life for Alzheimer’s patients and their care-providers diminishes significantly with time, while its burden on the U.S. health care system increases. An effective Alzheimer’s treatment is an unmet need, the burden of which will grow as the baby boomer population retires during the next ten to fifteen years. Innovation in this space could be transformational both for the patients and companies that crack Alzheimer’s genetic code. 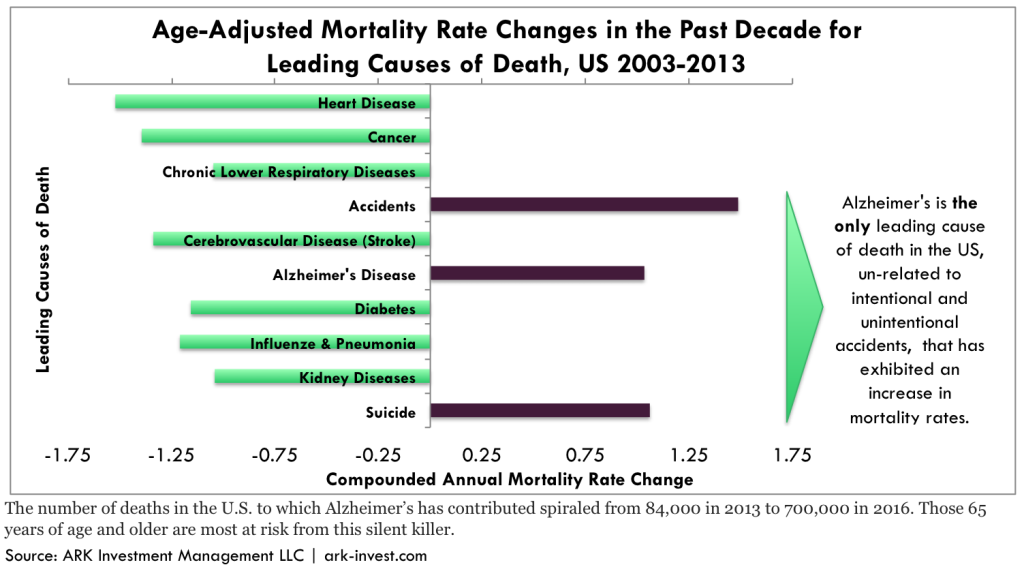 Alzheimer’s is the Third-Leading Cause of Direct Health Costs
Because the mortality rate associated with Alzheimer’s has been increasing, it now ranks among the top three causes of direct health expenditures in the U.S., as shown below. By 2020, Alzheimer’s probably will be the second largest direct health expenditure in the U.S. If its mortality rate continues to increase while that for diabetes declines, Alzheimer’s could become the largest expenditure sometime in the next decade. Notably, these figures do not include costs associated with loss of productivity as family members care for the sick. 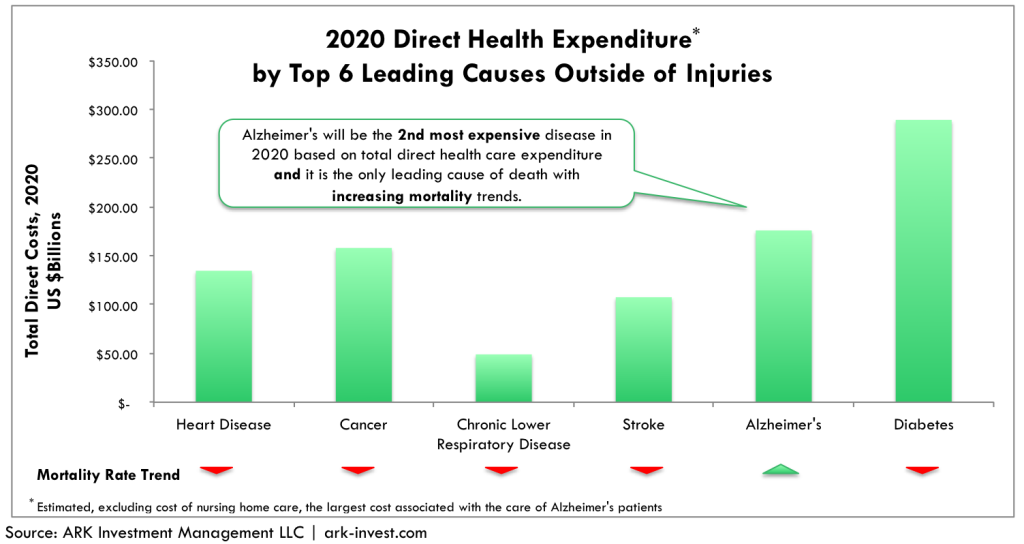 Alzheimer’s is the Fastest Growing Category of Health Care Spending
As the baby boomers age, spending on Alzheimer’s is likely to increase 26% by 2020. This growth rate exceeds that associated with any other major disease, as shown below. 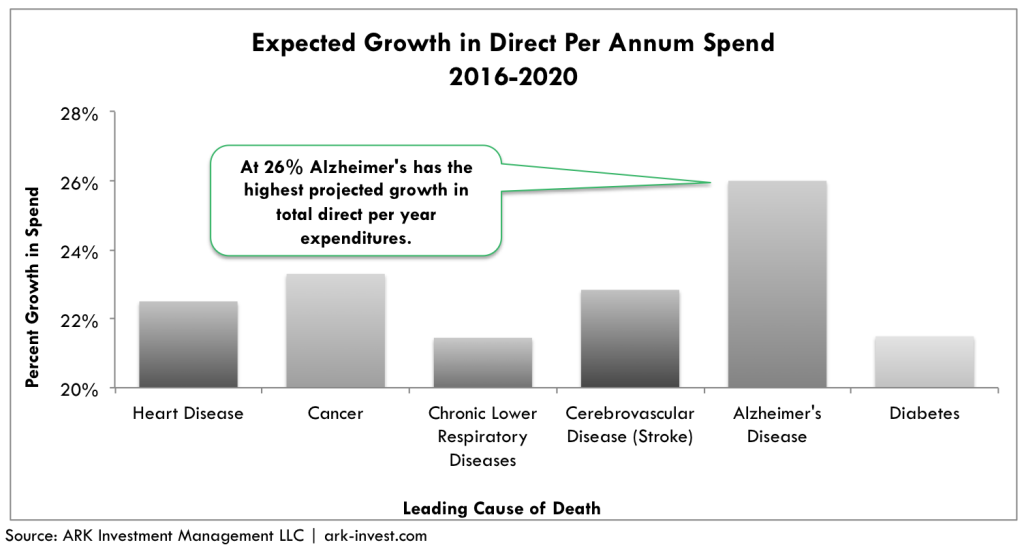 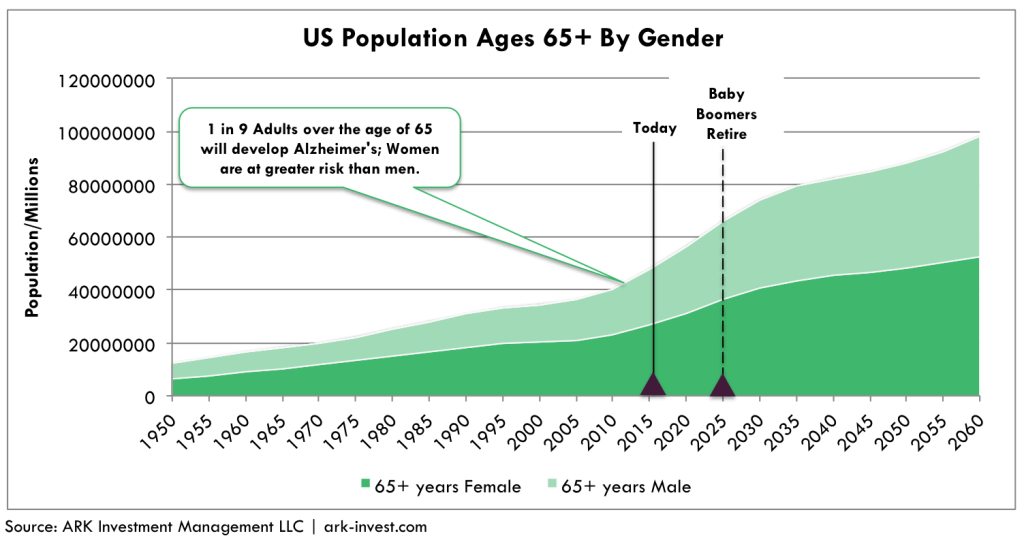 First Mover Advantage
Without any effective therapies on the market today, companies focused on Alzheimer’s drug development are well positioned to accrue value, if they can develop working treatments… a big if.

Alzheimer’s has been resistant to therapies for decades, causing some critics to blame scientists’ basic biological understanding of its root cause.[5] Others argue that a more nuanced appreciation for the disease’s progression and earlier diagnosis could yield therapeutic results.

Some Alzheimer’s treatments in trial today could support the more optimistic claims. Notably Biogen’s [BIIB] Phase 3 Alzheimer’s candidate appeared to stabilize cognitive decline and was accepted into an accelerated approval program in Europe in mid-2016. Its therapy is based on monoclonal antibody (mAB) technology derived from B cells extracted from a population of elderly citizens that proved resistant to the disease.

A number of smaller players are making progress as well. Anavex’s [AVXL] lead candidate, ANAVEX 2-73, received a two year clinical extension on a Phase 2 study and Switzerland-based AC Immune [ACIU] recently filed for an IPO in the U.S. to develop its pipeline of Alzheimer’s drugs.

Costs associated with caring for Alzheimer’s patients are rising, as their mortality rates are increasing, and as baby boomers enter retirement at an accelerated rate. Meanwhile, the number of facilities dedicated to caring for these patients is diminishing.[6] Any therapeutic company able to convert Alzheimer’s from a cruel killer into a chronic disease will save the health care system billions of dollars, as it produces one of the largest therapy breakthroughs in history.