Can you believe that in 2014, $160 billion worth of corn will be grown on land that theoretically could produce $560 billion? By producing and delivering seeds precisely designed for the square meter of earth in which they will be grown, agricultural biotechnology and genetic engineering will narrow this gap. As illustrated below, global corn yields are roughly half of what they are in the US alone, and US yields are a bit less than half of what is theoretically possible today. 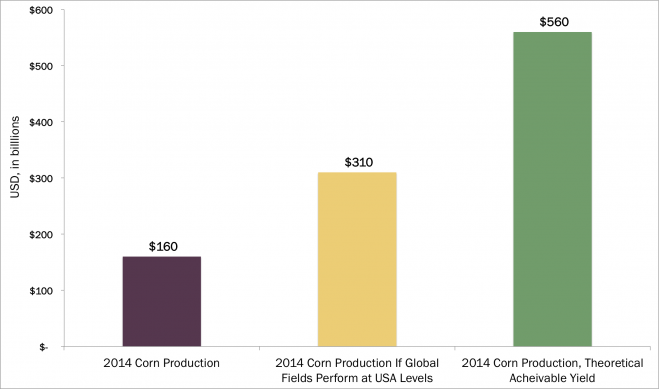 Agriculture isn’t the first industry to come to mind when “genomics” is mentioned, but it ought to be. Gregor Mendel’s experiments in pea plant heredity laid the groundwork for modern genetic science. Indeed we wouldn’t have an agricultural industry at all without the genetic-selection-based plant domestication that occurred thousands of years before.

Empowering farmers with superior seeds is not a new business. Monsanto [MNO] has built upon that model to become the largest genomics company in the world. [2]

Of course, for most of the company’s history, the genetic techniques that it exploited were no different than those that led to the domestication of plants in the first place: breed together plants with desirable characteristics, and then use the best of the seeds.

Modern genetic techniques are beginning to transform the business of seed generation for companies like Monsanto. Seed producers have been able to technologically insert desired genes since the late 1990s, but the palette of genes from which they can select is expanding dramatically, and the algorithms that lead to success are advancing rapidly. For example, Evogene ([EVGN] [3]) allows companies to predict the growth impact of more than 4,000 genes used singly or in combination. Desirable seeds can be produced and validated with much more precision and at much lower cost.

The impact of these advances is likely to be dramatic. As seen below, in 2013 roughly $10 billion worth of four important crops (corn, sorghum, wheat, and soybeans) never made it to market because of pest infestation or drought. Appropriate seed selection would have protected crops against both. Of the potential yield from crops planted, over 8% of the total corn is lost on average (19% of sorghum is lost, 20% of wheat, and 1% of soybeans planted). 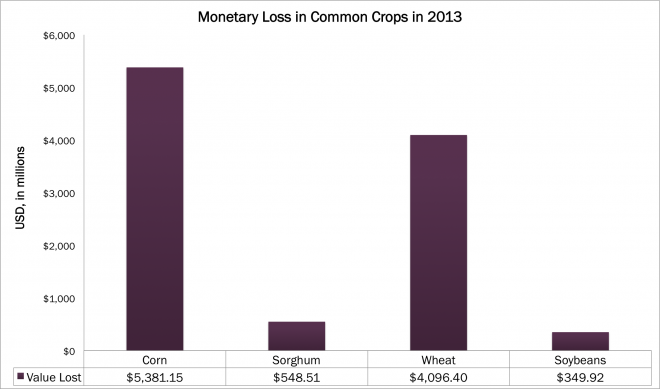 Thanks to the promise of agricultural biotechnology, and new genetic computational tools, the $400 billion gap between actual and theoretical corn yields should close. [4] And, that is just for corn. As the genomic revolution spreads from crop to crop and country to country, just think of how much more productive farmers could be, how much lower food prices could be, and how much more dramatic the strides towards eliminating world hunger will be.