Investigating Bitcoin 1 | 5.  A series of articles investigating the disruptive potential of bitcoin and evaluating it as a currency.

The software underlying Bitcoin enables bitcoin as an elegant means of exchange. In this article, “Bitcoin” refers to the open source, decentralized technology platform upon which “bitcoin”, the digital currency, depends. Like cash, transactions processed on the Bitcoin network are fast, irreversible, peer-to-peer, and nearly frictionless. Superior to cash, they can be completed quickly at any distance, with precision out to the eighth decimal place. Consequently, evangelizers often accept bitcoin as cash brought into the digital age, a logical step for innovating civilization’s means of exchange.

The blockchain supports Bitcoin and is the equivalent of a digital and transparent ledger that records every transaction ever made. Though a transaction can be propagated through the network near instantaneously, the first confirmation of its validity via incorporation into the blockchain takes about ten minutes. bitcoins can be transferred from one address to another without a central intermediary. As a result, all transactions, from those moving coins between smartphones, to others firing off large payments to vendors, can be equally rapid and efficient.

As is the case with cash, chargebacks are impossible after a bitcoin transaction, making them less vulnerable to fraud than other common payment mechanisms, like credit cards. The irreversible nature of bitcoin transactions, however, suggests that they lack the consumer protections provided by credit cards or other intermediated transaction mechanisms. While the US Consumer Financial Protection Bureau has alerted the public to risks associated with the use of bitcoin, including the lack of the kinds of protections provided by banks and credit cards, with the advent of multi-signature bitcoin wallets, tools for escrow and other sources of protection can be built on top of the Bitcoin protocol. bitcoin’s consumer protection apps are opt-in, empowering individuals to choose whether or not to pay for these services, but also necessitating educated users.

Currently, one of the most important advantages of bitcoin as a means of exchange is its low transaction fee structure. The fee per transaction can vary because fees serve as an incentive for the machines underlying the Bitcoin network— which are maintained by miners— to prioritize a given transaction in their next “block”.[1] Since early 2012, the average transaction fee has been a mere 0.01%,[2] with the bitcoin sender voluntarily electing to pay fees to miners to prioritize incorporation of their transaction into the blockchain. In 2014, Bitcoin facilitated $23.4 billion in total transaction volume for only $2.5 million in fees. The chart below illustrates the direct 0.01% bitcoin transaction fee compared to the average fees incurred for other types of transactions.[3][4][5]

It is important to note, the fee included in this calculation is only the direct fee associated with bitcoin transactions carried out on the blockchain. On top of that fee could be another 1-2% for services like a bitcoin exchange or processor, such as Coinbase. These costs are not inherent to the Bitcoin network, but a function of limited acceptance and the consequent need to exchange into and out of different currencies.[6]

Despite speed, security and transaction fee benefits, bitcoin as a means of exchange is hampered by its limited acceptance. Currently, Bitcoin is suffering through the “chicken and egg” dilemma that many platform technologies experience while gaining traction. In short, customers will be more likely to try bitcoin when they see more merchants accepting it, while merchants will be incentivized to accept bitcoin when they experience high consumer demand.

BitPay and Coinbase offer some concrete numbers on the merchants that accept bitcoin. As of August 1, 2015, they claimed sixty thousand and forty thousand businesses on their respective platforms, while Spendbitcoins.com prominently places “Over 100,000 Merchants Accept Bitcoin” on its landing page. A Goldman Sachs survey of independent sales organizations and merchant acquirers found that 2% of US merchants already accept bitcoin, and 23% plan to start accepting it by 2017. According to Jack Dorsey, CEO of Square, 8 million merchants in the US accept credit cards. This implies that 160,000 already accept bitcoin, and 1.8 million could accept it by 2017. Among the notable merchants that accept bitcoin today are Ebay [EBAY], Microsoft [MSFT], Overstock [OSTK], Expedia [EXPE], Dish Network [DISH], Dell and Reddit. Given the World Bank’s estimate of 125 million “micro, small and medium enterprises” worldwide, bitcoin’s runway is massive.

Consumer acceptance of bitcoin is on the rise as well. The two largest consumer bitcoin wallet hosts, Coinbase and Blockchain.info,[7] claim 3.8 million and 3.9 million worldwide wallets, respectively. Combined, they have grown more than 120% since August 2014.[8]

As of March 2014, roughly 90% of Coinbase’s users were in the US,[9] suggesting at first blush that from Coinbase alone more than two million Americans have bitcoin wallets, or twenty consumers for every accepting merchant. More likely, however, is that many users have abandoned their wallets, and that bitcoin holdings are more concentrated. In early 2014, for example, CoinDesk reported only 927 addresses owned the majority of bitcoins. Since then, the distribution of bitcoins has improved, as the top 927 addresses now hold 37% of total bitcoins outstanding.[10] With addresses composed of seemingly random letters and numbers, identities are largely unknown, and the same entity could hold multiple addresses. That said, the amount held by each address is transparent to the world via the blockchain. 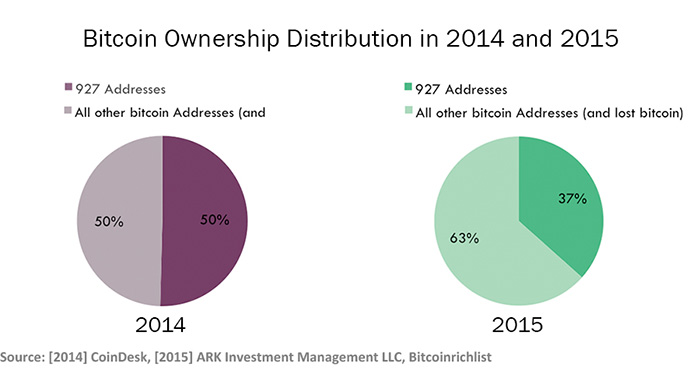 Beyond this elite bitcoin echelon, the blockchain’s ledger reveals a maximum of 400,000 users with more than $100 in their bitcoin wallets.[11][12] If $100 were the cutoff to classify a wallet user as an active bitcoin player, then no more than six percent of the bitcoin wallets between Coinbase and Blockchain.info are in active use. Compounding the difficulty in determining a wallet’s meaning is the fact that a user can use a bitcoin wallet purely for investment purposes, rarely if ever using it for transactions. If all users were to hoard bitcoin, then bitcoin’s role as a means of exchange could grind to a halt.

Those who do seek to pay with bitcoin must employ creative methods, underscoring that bitcoin does not yet function smoothly as a means of exchange. For instance, to purchase items on Amazon [AMZN] or Whole Foods [WFM], neither of which directly accepts bitcoin yet, many users will work through Gyft, a startup that accepts bitcoin via BitPay and purchases gift cards redeemable at various stores or sites. Similarly, there is a proliferation of services and sites, like spendbitcoins.com, that identify businesses open to bitcoin purchases. The existence of these sites is confirmation that finding opportunities to spend one’s bitcoins is not a trivial problem. Yet, the number of businesses that accept bitcoin continues to grow, gradually legitimizing bitcoin as a viable payment alternative to fiat currencies.