UPDATE: This article has been updated as of April 20, 2016 with the most recent 3D printing market data available.

The size of the 3D printing market could grow by orders of magnitude in the next decade. Wall Street estimates a three to six fold increase from present reports, and Wohler’s doubled their forecast from 2013 to 2014.[1]

Yet analyst outlooks for Stratasys [SSYS] and 3D Systems Corp.[DDD] could be far too low. Will 3D printing take over a much larger share of manufacturing? As seen below, McKinsey projects the market to explode from $5.2 billion today to anywhere from $180 to 490 billion by 2025.[2] 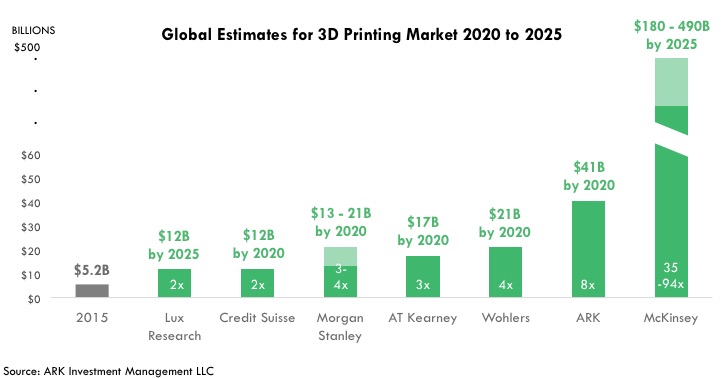 The 3D printing market will revolutionize manufacturing for low volume, highly customizable parts. Applications will be broad based in the consumer market, as well as industrial markets such as medical devices and implants, automotive and aerospace, chemical and energy, and even manufacturing in outer space. For example, NASA sent a 3D printer to the International Space Station for that purpose. Researchers hope to use the printer to eliminate the need to take certain objects into space, printing parts on board instead.

3D printing will collapse the time between design and production. It will shorten lead times, reduce prototype costs, produce lighter products and provide for greater design complexity in manufacturing. General Electric [GE] estimates that it currently uses 3D printing in some form for 10% of its manufacturing, but projects that number to grow to roughly 20%-25% in 10 years, and to 50% within 20 years. Since GE’s cost of sales were about $80 billion in 2013, if 3D printing were to be used in more than 50% of its manufacturing processes, GE would save billions of dollars. Lockheed Martin [LMT], another trailblazer in this market, is using 3D printing for titanium satellite components, and has reduced cycle times by up to 43% and costs by 48%.

3D printing will continue to steal market share from traditional manufacturing as the technology evolves. For example, high speed sintering could enable 3D printing to take over a larger share of the $360 billion injection molded parts market.[3] Also, as printer companies experiment with different materials, new possibilities will open for printed parts. For example, a lab co-owned by General Motors [GM]and Boeing [BA] with funding from DARPA and the U.S. Department of Defense recently developed new materials that can create 3D printed ceramics, which could eventually help create more efficient aerospace parts.

While a great deal of the press has focused on printing applications in the home/consumer space, the driving force for 3D printing will come from the industrial sector. Carl Bass, CEO of Autodesk [ADSK], said, “3D printing has been over-hyped for home use but underappreciated for its industrial possibilities.” In support of this assertion, both Stratasys and 3D Systems have pivoted away from their consumer printer lines in an effort to restructure and focus on industrial opportunities. 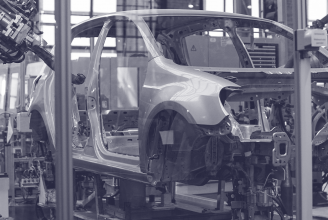 Tags: Automation, Electric Vehicles, Manufacturing
See More
See all articles
You are leaving ark-invest.com
By clicking below you acknowledge that you are navigating away from ark-invest.com and will be connected to ark-funds.com ARK Investment Management LLC manages both web domains. Please take note of ARK’s privacy policy, terms of use, and disclosures that may vary between sites.
PROCEED