Earlier this week papers were filed for the Snap Inc. IPO. Snap Inc. is the parent company of Snapchat and based on its S-1 prospectus, Snap seems to have a unique worldview, rapid growth, staggering costs, and no pretense of public shareholder governance.

The Snap Inc. IPO makes clear that it doesn’t view itself as a social media or an internet company, but a camera company. Last year, it released its first hardware product, a pair of camera-mounted sunglasses called Spectacles. The company views the camera as the “great opportunity to improve the way people live and communicate” and plans to “take risks in an attempt to create innovative and different camera products…”

Snapchat is growing quickly but we believe it’s starting to feel the heat from competition. The service has 158 million daily active users (DAUs), up 48% from a year ago, putting it between Facebook [FB] and Twitter [TWTR] when counting from the same base, as shown below.  Growth though is slowing. Quarter to quarter, its DAUs grew 7% during the third quarter, and only 3% in the fourth. The company explained that the slowdown was the result of technical difficulties. More than a coincidence, last quarter Instagram launched Stories, its version of Snapchat’s core features. 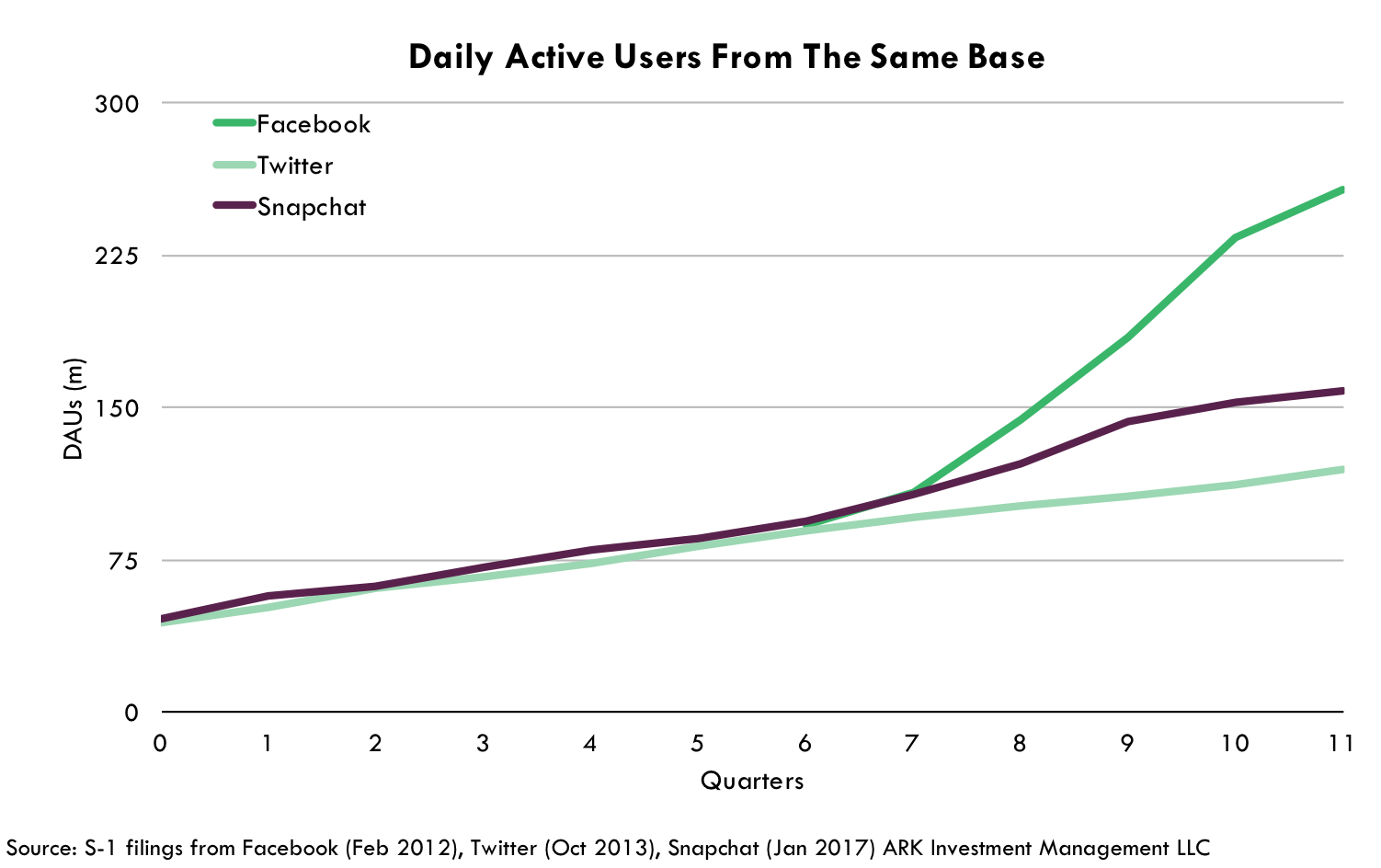 Snapchat is very expensive to operate: for most of its life, its cost of revenues has been higher than revenues, as shown in the chart below. In other words, its gross margins have been negative. Interestingly, they turned positive in the fourth quarter of last year, just one quarter before filing for its IPO.

What’s costing so much? Cloud hosting services. Unlike Twitter and Facebook, Snap has outsourced its data centers to Google Cloud, with a commitment to spend $2 billion in service fees over the next five years. Snapchat’s gross margin is 7% which, compared to Twitter’s 63% at the same revenue base [1], is startlingly low.  Since Twitter has yet to reach operating profitability, Snapchat likely will need a dramatic change in its economics to turn a profit.

Finally, Snap is pushing the idea of founder-controlled public companies to its limit. Facebook and Google [GOOG] both used a tiered share structure that allowed the founders to retain majority voting shares after the companies went public. In Snap’s case, the two co-founders own 88.6% of voting shares, and newly issued Class A shares will have zero voting rights: public shareholders may reap a share of future earnings, should they materialize, but will have no say in how the company is run.

We think the Snap Inc. IPO will continue the company’s unconventional streak. The messaging service has substantially higher operating costs than its peers and may not reach profitability for many years. On the plus side, it is growing its user base quickly, has high engagement among millennials, and is expanding into new product categories. We will follow this company closely in the years to come.