If Netflix is the new broadcast TV, then TikTok may be the new cable TV, serving users with a “seemingly” random and endless feed of 15 second-ish videos. A Chinese app known domestically as Douyin, TikTok has amassed over a billion users globally in fewer than four years.

TikTok is the new Vine, the popular 6-second video app that Twitter bought before its time and then shut down in 2016. TikTok has reimagined online distribution and appears to be disrupting not only social media but also the entire digital entertainment space.

Unlike most social platforms with follow-and-feed content models, TikTok focuses on serendipitous discovery powered by an artificial intelligence (AI) recommendation engine. After a user uploads a video, TikTok tests it on a small number of other users and, depending on engagement statistics like time watched, likes, comments, shares, and downloads, decides whether or not to push it to a broader audience. It repeats that cycle with larger groups until engagement peaks. Thanks to this viral distribution model, in the three years that it has been available outside of China, TikTok has scaled to 33% of YouTube’s daily views, a service that has been in place for 15 years. 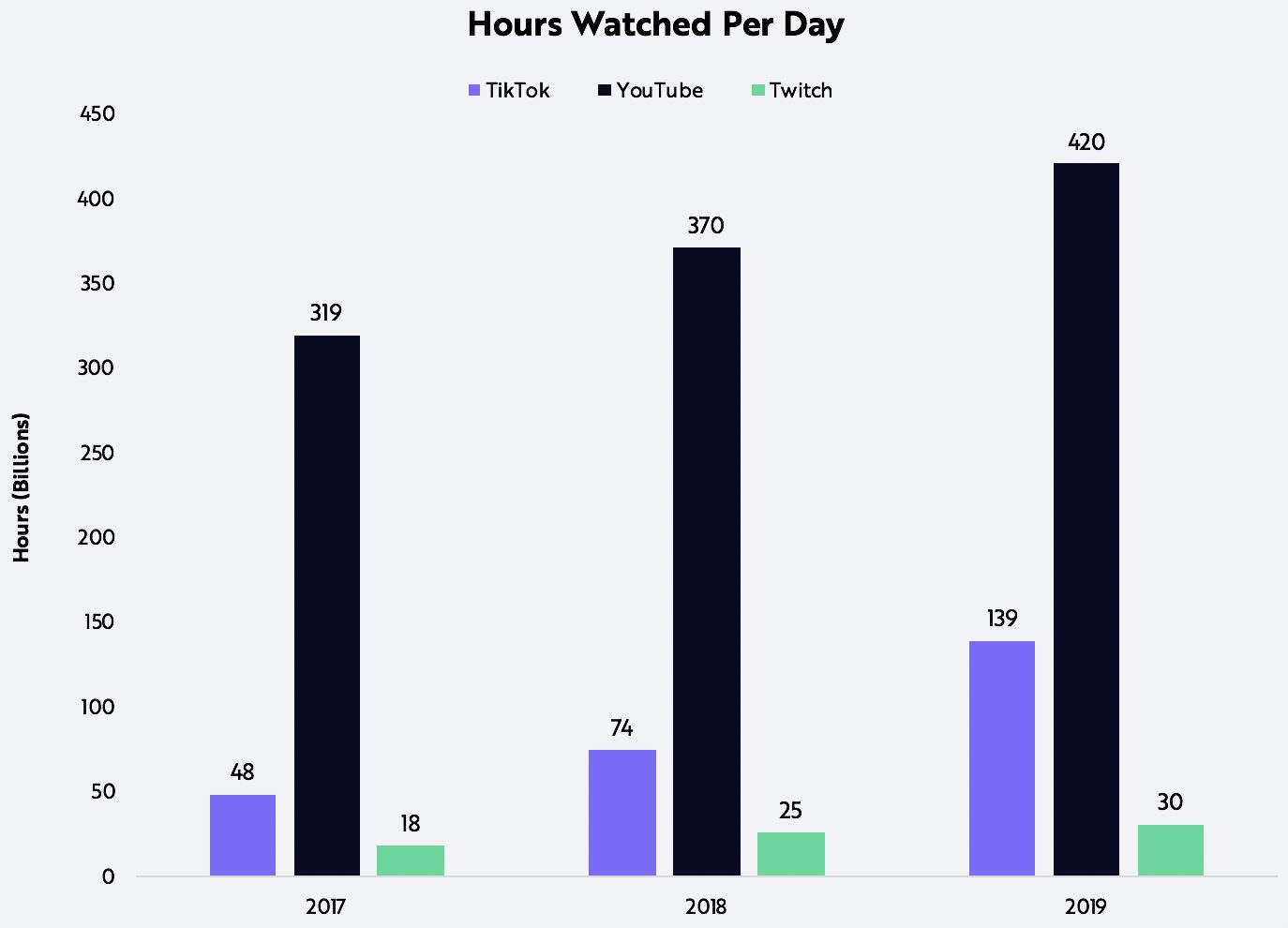 TikTok’s distribution model gives any user, even those with no followers, the opportunity to go viral, turning upside-down the follow-and-feed model that rewards users with massive numbers of followers. Quite simply, its merit-based system surfaces the most enjoyable or useful content that TikTok’s users upload. A comparison of the top posts last year on Instagram to those on TikTok illustrates the difference between the two models: last year, while a few celebrities with millions of followers – like Kylie Jenner, Selena Gomez, and Dwayne “The Rock” Johnson – dominated the top posts on Instagram, users with relatively few followers accounted for some of the most popular videos on TikTok. More important, as measured by views, the reach of TikTok posts far  exceeded their follower bases. For perspective, based on their top posts, the like-to-follow ratio on TikTok was 3.7, more than double the 1.6 on Instagram, as shown below. 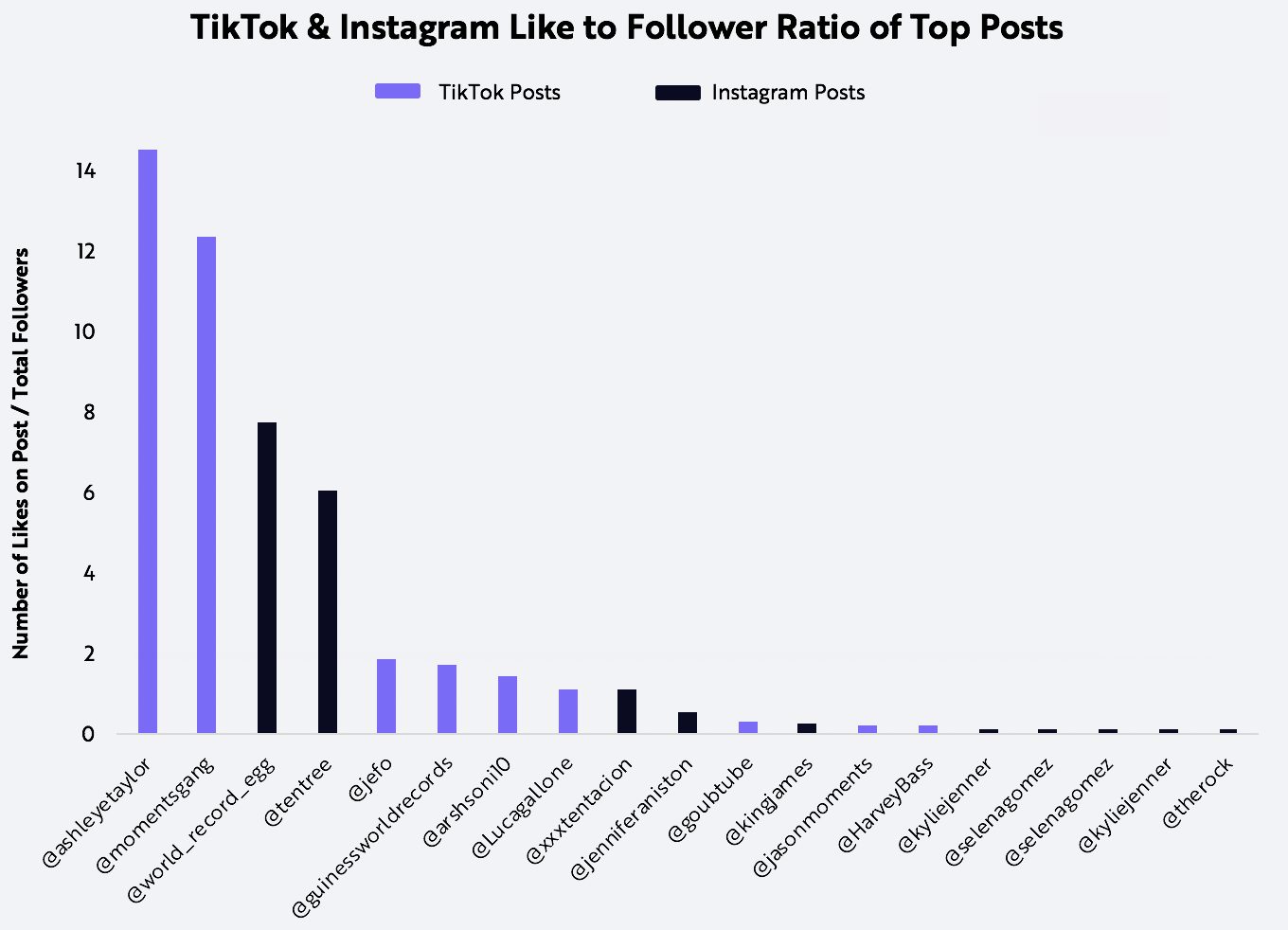 TikTok’s distribution model gives any user, even those with no followers, the opportunity to go viral.

TikTok makes it easier for users not only to achieve engagement levels not possible on other social media, but also to create professional-grade content with AI-enabled video editing tools. We uploaded a few videos and were blown away by TikTok’s ability to pair videos with soundtracks that make each post more engaging: TikTok’s AI Working Magic.[1]

TikTok’s content production and distribution strategy is consistent more with new-age entertainment companies than with social media apps. While considered a “social networking app”, TikTok’s usage suggests otherwise, as shown below. The daily time that users spend on TikTok is twice that on “social networking” apps. Moreover, Apple’s App Store classifies TikTok as “entertainment”, a category that attracts two times the minutes per user per day of social networking apps.

According to our research, TikTok is much more an entertainment company than a social network! 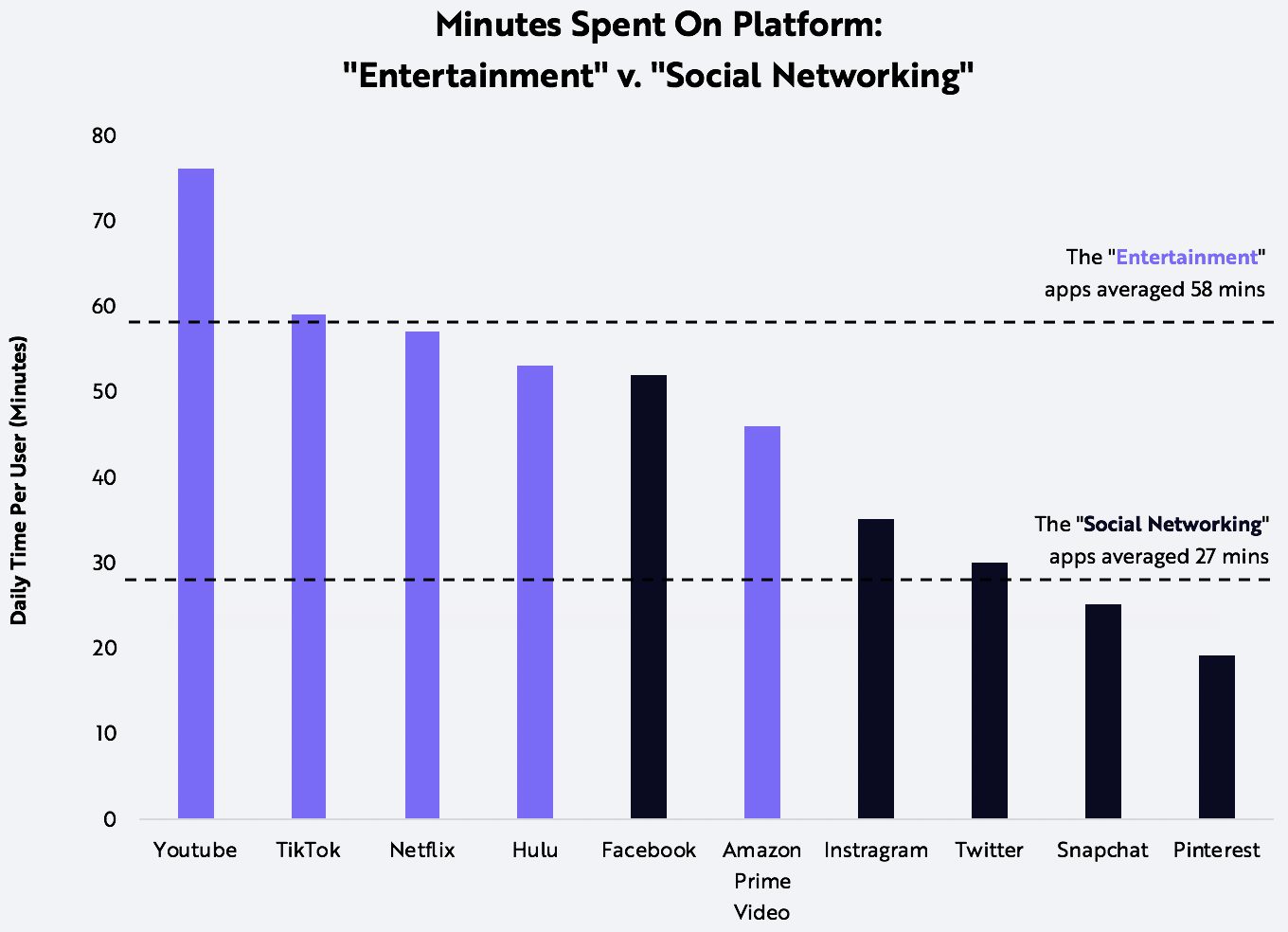 Note: Usage time are based from Google Play Store

*We would like to note that the deal between Microsoft and TikTok is not final and may not materialize. As it stands today, Microsoft is the front runner in talks to buy TikTok from ByteDance, its parent company.