Machine learning—software that gets smarter by learning from data—is exploding in popularity. To keep up, servers—the workhorse of the Internet—will have to get a lot smarter. Specifically, they’ll need greater computing horsepower to process image, voice, and other forms of cognitive workloads. Today, servers are primarily composed of processors, memory, storage, and networking. Servers built for machine learning, however, will need an additional ingredient—graphics processing units (GPUs). ARK estimates [1] that GPUs could comprise up to 75% of the value of these servers as machine learning becomes a primary workload. This dramatic shift in the hardware mix will siphon value away from the central processing unit (CPU), to the benefit of GPU manufacturers.

The Internet is built on web servers—computers dedicated to serving up webpages and applications that operate 24/7. For the most part, servers use the same components as PCs. CPUs are the most valuable component in traditional servers, followed by memory and storage, as shown in the chart below. Supporting components like the motherboard, network adaptors, power supply, cooling, and chassis make up the rest. This recipe in varying combinations, scaled to millions of units, is what makes up the modern cloud datacenter. 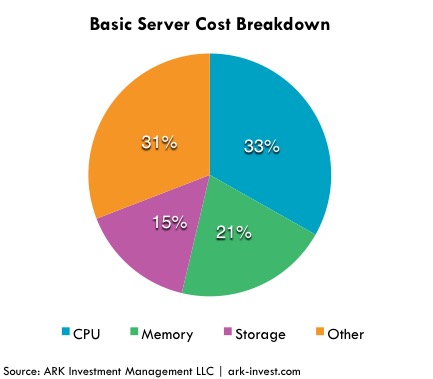 Machine learning, the core technology behind services like Siri, Skype Translator, and Google Photos, adds a new workload to datacenters. Although today’s servers can handle these requests at modest scale, as voice and video usage continues to increase, cloud service providers will need accelerators, such as GPUs, to improve performance, cost, and energy efficiency. 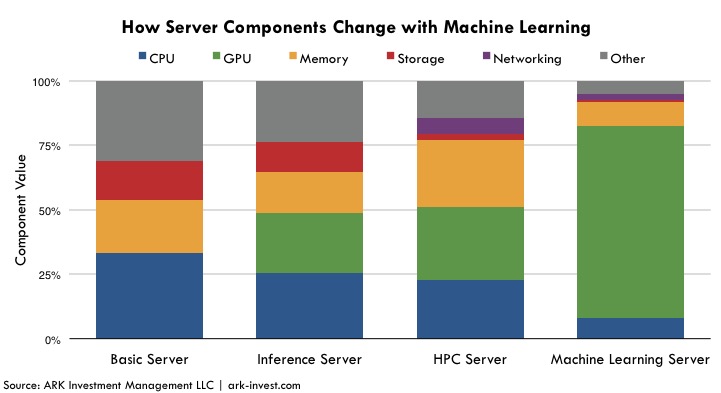 The value shift is far more pronounced with multiple GPUs in High Performance Computing (HPC) servers. HPC servers tackle the most demanding applications such as scientific research, oil and gas exploration, computational finance, and big data analysis. Unlike commodity web servers, which are designed for maximum scale, HPC servers are designed for maximum performance and require accelerators like GPUs. In the example above, modeled after the popular Dell C4130, four NVIDIA Tesla K40 GPUs are installed in a single server. At $2,700 a card, $10,800 in total, the GPUs make up almost half of the server’s bill of materials. 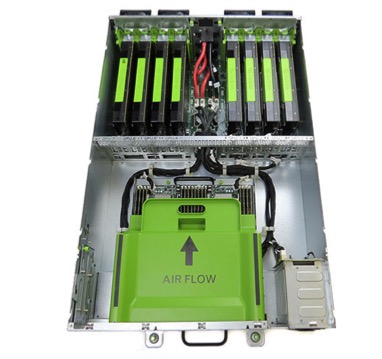 When researchers discovered that GPUs could be used to accelerate the training of neural networks, they created servers with even greater GPU density than HCP servers. Both Facebook [FB] and Baidu [BIDU] have deployed 4U servers with up to eight GPUs per server to accelerate the training of neural networks. Based on ARK’s research and analysis, GPUs make up as much as 75% of Facebook’s Big Sur server hardware cost, with other components playing mostly a supporting role.

Having witnessed the market potential for accelerators, competitors are catching on. Intel [INTC] is developing “Knight’s Landing,” a 72-core chip that will deliver GPU level computing performance. Intel also has acquired Altera, with the long-term goal of integrating programmable gate arrays into its chips to enable acceleration of data center applications. Meanwhile NVIDIA [NVDA] is set to release its Pascal chip this year with substantial performance, memory, and bandwidth improvements. 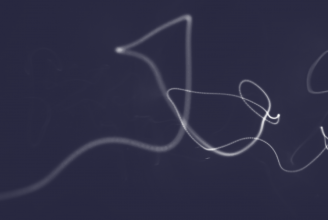 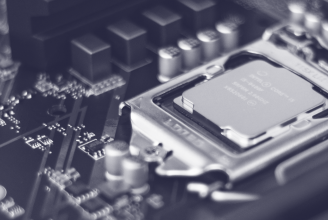 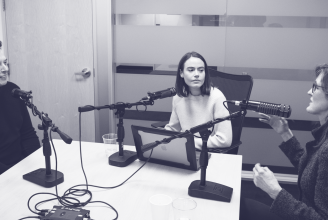