Delivery drones are ready to launch, once regulators give them the greenlight. So how many people will these drones be able to serve in the US?

Our research suggests that, if the FAA approved them today, Amazon’s [AMZN] drones could transport packages to more than 50 million people in roughly 30 minutes. The battery improvements we expect during the next five years could increase their reach to nearly 100 million people, or 30% of the US population. Here’s how we reached these conclusions.

The market for drone delivery will depend on two variables that will impact the range of the service: the weight of the drone and its payload,[1] and the specific energy of its battery.

Amazon says that its drones can deliver packages weighing up to five pounds, accommodating 86% of the products it delivers today. As shown below, an Amazon-like drone carrying a five-pound package could fly for 31 minutes given the energy density of batteries today.

Drones are highly sensitive to mass. Without a payload, the same drone could fly for 45 minutes, and drones made with lighter materials could fly even further. 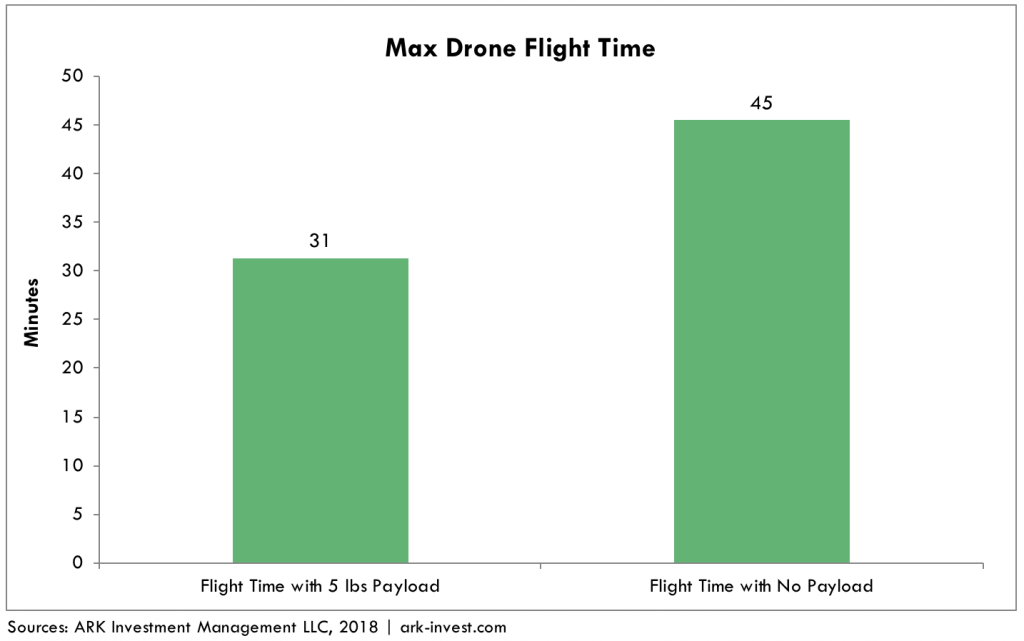 Innovations in battery chemistry and manufacturing also will impact the range that drones will be able to fly. Thanks to an increase in specific energy, or watt hours per kilogram, new generations of lithium-ion batteries should weigh less, increasing the range for an Amazon-like drone from 10 miles today to 17 miles in 2022, as shown below.[2] 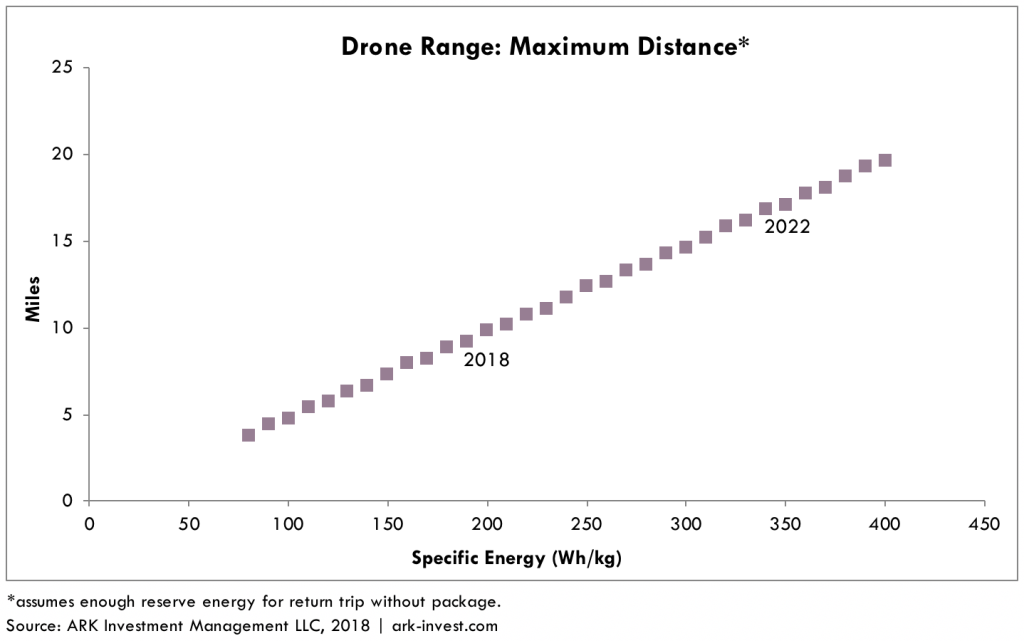 In December 2014, Amazon launched Prime Now in New York, offering delivery of its most frequently purchased items in less than an hour. Today, Prime Now is available in many densely populated cities in the US where Amazon has hubs, as shown in the map below. 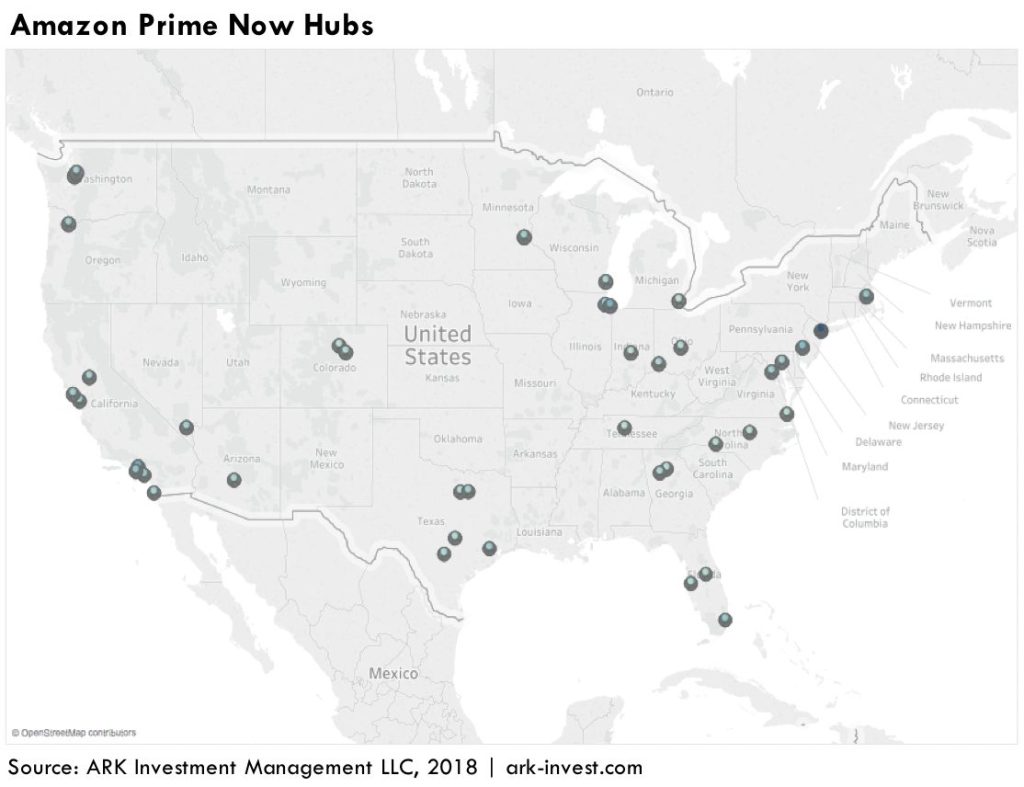 Based on our research, if it were to launch its drone delivery service from these Prime Now hubs today, Amazon could reach roughly 51 million people, or 16% of the U.S. population. With more energy dense batteries, the drones would be able to service nearly 100 million people, or 32% of the population, within the next five years, delivering a package profitably in fewer than 30 minutes for less than one dollar.

So how many people could Prime Now’s drones serve in the US eventually? With existing battery technology, we believe an Amazon-like drone technology could travel about 20 miles, double today’s 10-mile range and more than the 17 miles we are projecting for 2022. As shown below, the 20 mile radius would accommodate 115 million people purchasing goods. However, new chemistries and solid state batteries could increase the specific energy well beyond the current maximum 400 watt hours per kilogram limits of lithium ion batteries, further extending the range. From a different angle altogether, if launched from delivery trucks or blimp fulfillment centers, drones potentially could reach most of the US population. 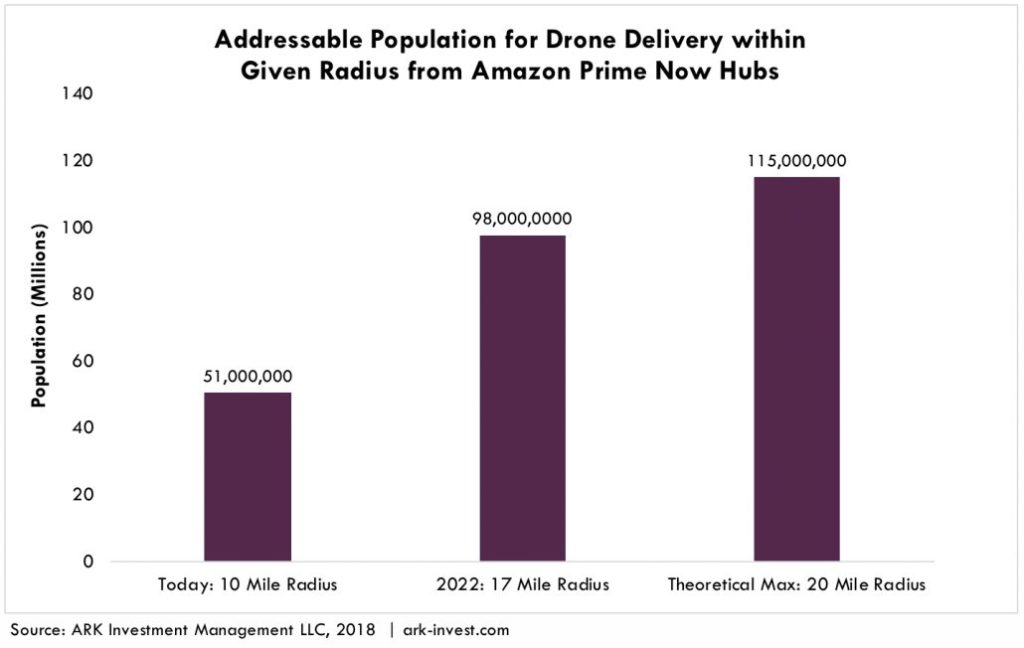 Redesigning the shape and size of drones also could change the calculus, as the 20-mile theoretical maximum range applies to a specific drone design. In fact, according to our research, some passenger drones with the same battery technology as an Amazon-like drone can travel longer distances, suggesting that in the future drones could be custom-designed for a multitude of end uses.

Cover Image: uploaded by Richard Unten is licensed under CC BY 2.0