NVIDIA’s rapid penetration of the data center has pushed its market capitalization to $90 billion. It has eclipsed Qualcomm’s [QCOM] market cap and is more than half that of Intel [INTL]. Now the market is grappling with whether or not its growth is sustainable. Important to ask, how large is the data center market for accelerator chips like the GPU?

To do a reality check on these estimates and dimension the addressable market for GPUs and other accelerators, we analyze how server revenue flows into silicon revenue, shown in the chart below. According to IDC, global server revenues were $53 billion in 2016, of which $46 billion were x86 servers and $7 billion, non-x86 servers like mainframes and IBM [IBM] Power systems. 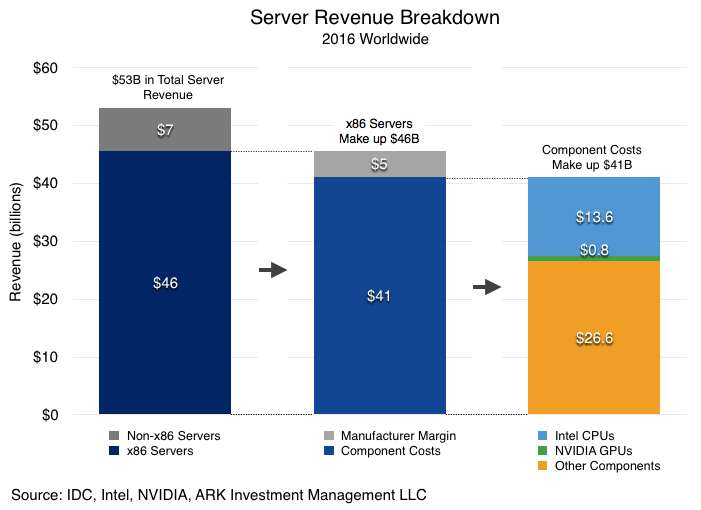 The bulk of the $46 billion in x86 server revenue pay for components such as CPUs from Intel, GPUs from NVIDIA, and memory from Samsung. The rest is kept by server manufacturers such as HP [HPQ] and Dell as gross margin. According to our estimates, x86 manufacturers margin is roughly 10%, leaving 90% or $41 billion to the component manufacturers.

So, how large will the market be for accelerators in the data center? As shown below, in five years, if accelerators capture 10% of server component spend, we estimate that would generate $4.5 billion in silicon revenue. If adoption is particularly strong, say 20%, this doubles to $9 billion. In our view, $4.5–$9 billion is a reasonable range for potential data center accelerator revenues. To reach NVIDIA’s $30 billion scenario, accelerators would have to capture 65% of the component market within three years, which seems unlikely.[3]

A key assumption in this analysis is that total server spend will remain flat over the next five years. While this may seem overly pessimistic,[4] server revenue from 1996 to 2016 has not grown [5] despite a massive internet boom spanning PC, mobile, and cloud. Moore’s Law along with virtualization software made it possible for servers to do much more at a lower cost. We expect GPUs and other accelerators will continue this trend.