Until cryptocurrencies surfaced seemingly out of nowhere, merchants and consumers seemed resigned to a 2.5-3% transaction toll with each credit or debit card purchase, while lower income individuals accepted the 8% remittance fee charged by companies like Western Union [WU].  Now, those payment platforms are facing the threat that cryptocurrencies could usurp their roles as intermediaries. Cryptocurrencies such as Bitcoin charge next to nothing for transactions, as shown below, and while they are in early and unstable days, they are developing some credibility and momentum as companies like Dell, DirectTV [DTV], Overstock [OSTK], and Expedia [EXPE] begin to include them as an accepted means of payment. The intermediary role they are attempting to displace is roughly $500 billion in market value.[1] 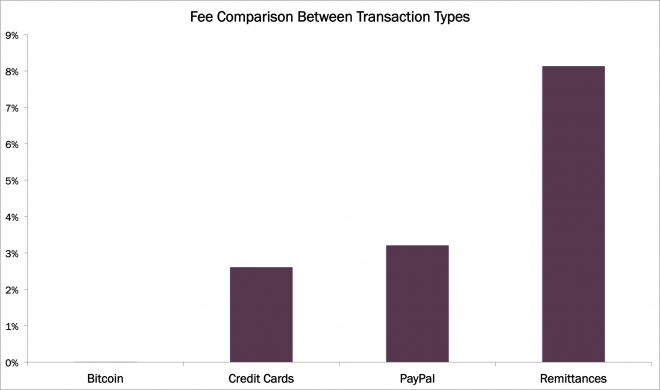 At the end of 2013, headlines declared that Bitcoin’s daily transaction volume briefly surpassed that of Western Union. Comparisons between Bitcoin and other payment services elucidate the efficiency and effectiveness of cryptocurrencies’ ability to transfer value around the world… but they are misleading

Many Bitcoin transactions are not a measure of underlying economic activity. Unlike with Western Union or PayPal, Bitcoin users move coins between personal wallets or currency exchanges. The rapid velocity facilitates security, storage, currency trading, accessibility, and anonymity. Consequently, the comparison to traditional payment services overstates Bitcoin’s role as a replacement.

While Bitcoin is not a replacement for traditional payment transfers yet, it soon could be. The Bitcoin ecosystem moves value around the world much more quickly and cost effectively than any other payments service. In 2013, Bitcoin transactions totaled nearly $15 billion, for which Bitcoin users paid roughly $2 million in fees. Compare that to Western Union’s consumer-to-consumer business which moved $82 billion while collecting nearly $3.4 billion in fees. Consequently, as shown below Western Union is 280 times more expensive to use than is Bitcoin! 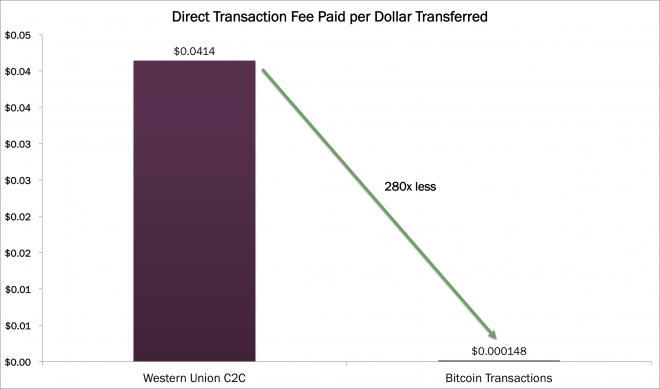 When Bitcoin’s daily transaction volume exceeded Western Union’s in 2013, it was remarkable not because Bitcoin was suddenly dominating the remittance market, but because it demonstrated how easily a cryptocurrency could function at the scale of a major centralized payment processor. It validates each transaction rapidly at de minimis cost via software and algorithms, avoiding all intermediaries (labor, bricks and mortar, traditional banking fees, and other overhead). Bitcoin is an all-purpose payments tool, and given its near zero marginal cost, it is a disruptive threat to any centralized payment systems.

Perhaps as provocative as their intermediary potential is the role that cryptocurrencies could play in monetary policy. As is illustrated below, Bitcoin was created at the same time as the Federal Reserve Board was turbocharging the monetary base during the financial crisis in 2008-2009. The supply of both had similar trajectories, until recently. As shown below, while the monetary base is governed by the Fed and has soared from less than $1 trillion to $4 trillion since 2007, Bitcoin’s supply will be capped at 21 million units unless a majority of miners agrees to an increase or decrease. Consequently, its growth is beginning to level out. 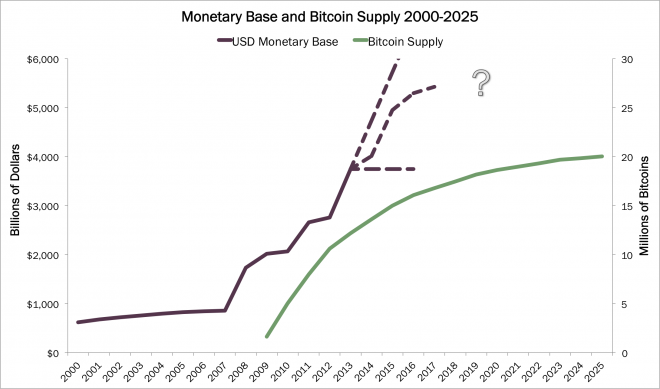 The monetary base has no such discipline governing it. Could it be that technology and science have combined to present the first serious challenge to monetary policy since the demise of the gold-exchange standard in 1971, or perhaps since the Federal Reserve Board was created in 1913?  Early days…but stay tuned! 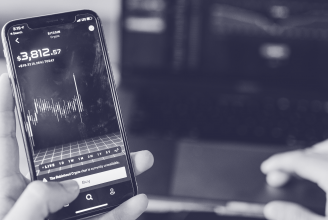 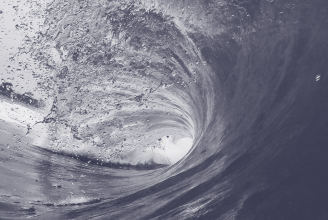 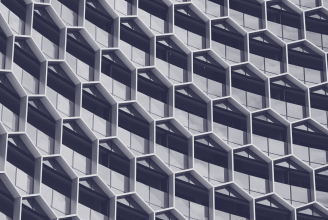