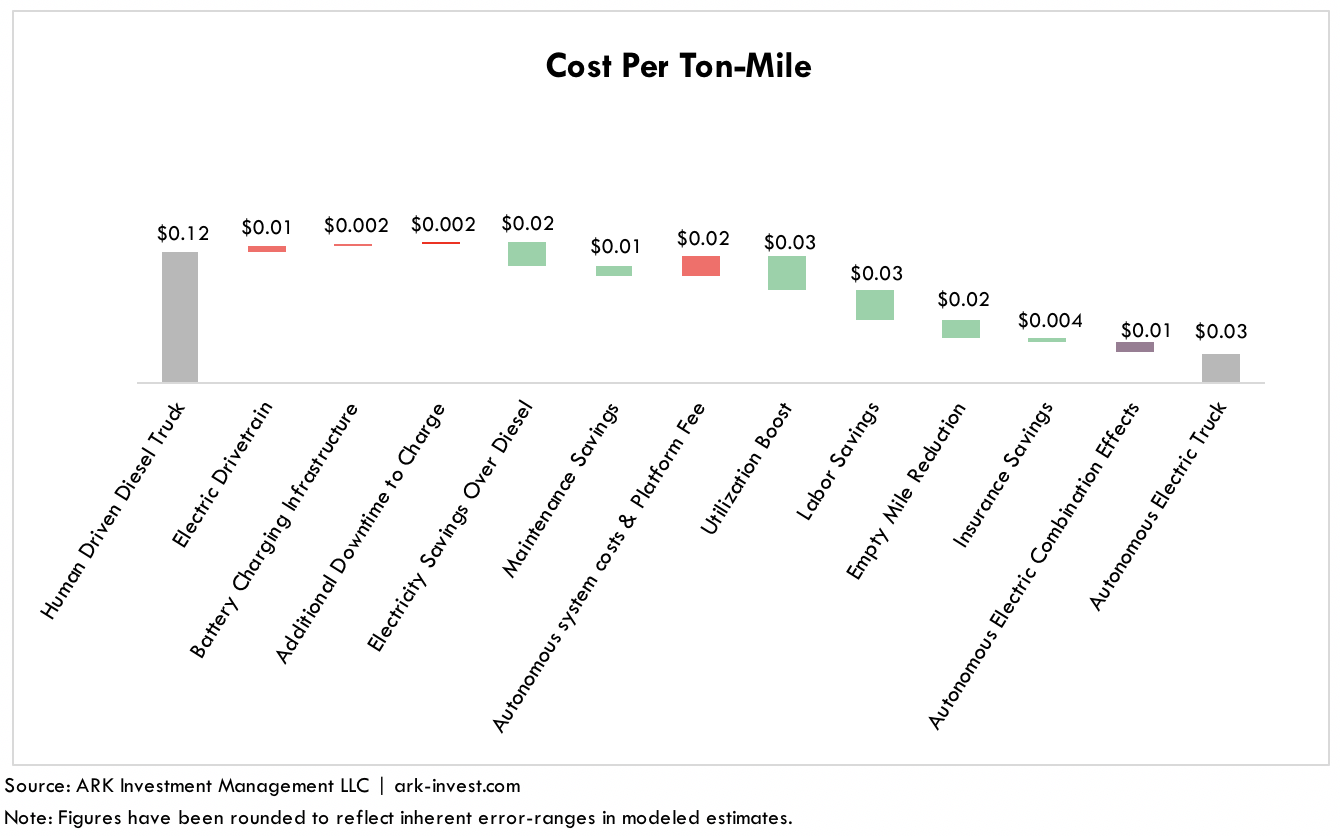 Higher utilization rates and reduced labor are the two most important variables in lowering autonomous trucking costs. Astonishingly, in the US today the capacity utilization of trucks is below 20%. ARK estimates that the utilization of autonomous trucks will be four times higher, not only relieving drivers of grueling duties behind the wheel but also reducing labor costs significantly.[1]

The shift toward autonomous trucks should spur consolidation in the trucking industry. Among the 500,000 trucking companies in the US, most are owner-operated with fewer than 6 trucks. Autonomous fleets should create more efficiency in routing and fewer “deadhead miles” – miles driven with an empty trailer. Fewer accidents also should lower insurance costs over time.

If autonomous electric trucks were to absorb the ton-miles shipped over rail in the US, the truck logistics market could double to roughly 3.4 trillion ton-miles, a $100 billion market-opportunity.[2] Door-to-door, trucks also will offer a speed advantage over rail.

Although trucks cause more infrastructure wear-and-tear than rail, if we were to adjust costs by a hypothetical cent per-ton assessment for pavement damage,[3] autonomous trucks still would be at parity with rail. Consequently, miles traveled on U.S. roads could soar exacerbating the demands on infrastructure. Thus far, the U.S. government has taken an autonomous-friendly stance: US Secretary of Transportation, Elaine Chao, recently stated that the federal government will prioritize new infrastructure projects related to autonomous driving. If made legal for commercial purposes, drones also could take some of the load off of ground transportation for goods lighter than five pounds.

That said, ARK expects autonomous trucks to be commercially available within the next five years. Among the companies currently developing autonomous truck platforms are Tesla [TSLA], Waymo [GOOG], Uber, Volkswagen [VLKAY], Volvo [VOLVY], PACCAR [PCAR], and Daimler [DDAIF]. Given Tesla’s aggressive investment in autonomous electric vehicles, it could infiltrate and take share in trucks much like it has in electric cars though, undoubtedly, the competition will be fierce.